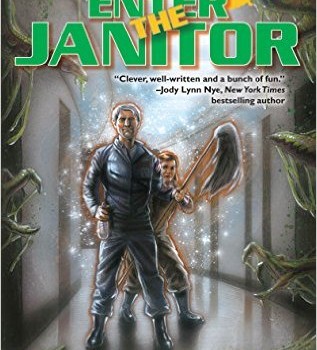 “Who are you people? Some secret government agency?”
“Gettin’ closer. But replace ‘secret government agency’ with ‘supernatural sanitation department. We’re inside Cleaner headquarters…”
Dani’s brow scrunched up. “The Cleaners. Right. So you run a paranormal laundromat?”
“That’s one division of our operations, yup.”
“I was joking!”
“Actually, you was bein’ serious without realizin’ it.”

Enter the Janitor is one of those books that makes you do a double take when you see it. A book about magical janitors fighting the evil forces of Scum? How could this not be an instant classic?

On the surface, Enter the Janitor follows a structure we’ve seen many times before. The student discovers they have magical powers and gets taken on by a old master who teaches them how the world really is. The difference here is that the “old master” is an old janitor named Ben who is part of a secret organization, the Cleaners, that is dedicated to fighting the forces of filth and disease, and whose agents are janitors, maids, plumbers, and handymen. The “student” is a germaphobic medical student named Dani with a formally foul mouth who goes through sanitizing gel and cleaning wipes at a truly frightening speed. I say she has a formally foul mouth because the management of the Cleaners decided that they need to keep a clean image so there is a spell in place that bleeps out swear words of its employees. Add in elements like a trash wizard, an elemental that lives in a squirt bottle, and a mostly evil guy with a crush on main character, and you’re bound to have a good time.

Enter the Janitor is a fun story that made me laugh out loud several times. The inability to swear makes from some funny situations.

She waved it away. “Forget it. I’m less concerned about a few ****fights …” She went cross-eyed for a second. “Are you serious? I can’t even say that?”
Ben grunted. “Francis maintains a long list of naughty words and phrases he submits to the Board each week to add to the foul-filter. I’ve contributed a lil’ bit.”
“Guh. Fine. I’m less concerned about a few roosterfights and more about the two attempts on my life before dinnertime.”

By the end, I did feel like it was overdone a bit, but still, it led to lots of laughs. None of that detracts from the story, however, which deals with the Cleaners discovering a new power in the world. This a series to watch out for, particularly if you like humorous stories.