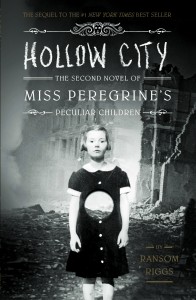 Miss Peregrine’s Home for Peculiar Children was the surprise best seller of 2011—an unprecedented mix of YA fantasy and vintage photography that enthralled readers and critics alike. Publishers Weekly called it “an enjoyable, eccentric read, distinguished by well-developed characters, a believable Welsh setting, and some very creepy monsters.”

This second novel begins in 1940, immediately after the first book ended. Having escaped Miss Peregrine’s island by the skin of their teeth, Jacob and his new friends must journey to London, the peculiar capital of the world. Along the way, they encounter new allies, a menagerie of peculiar animals, and other unexpected surprises.

Imagine a world where you are on a mission to return a debt that was paid for you and your entire family but in order to do so; you had to risk your life and the life of all of your friends. This is exactly what Jacob Portman has in store for him in Hollow City, the second installment of Miss Peregrine’s Home for Peculiar Children by Ransom Riggs. The entire Peculiar gang is back and they must race time and the ever growing threat of wights and hollows to save Miss Peregrine. The first novel left her stuck in her bird state; now she needs help returning to her human form and fast. The bad news is that the only way to do this is to get help from another fellow ymbryne, whom all appear to have been captured by the wights. Saving her, it seems, means breaking into one of the punishment loops which are filled with never ending perils and where anyone who enters is more likely to lose their life if not their sanity, in an attempt to rescue at least one captured ymbryne. The gang must use their peculiarness to successfully escape the wights gaining on their tail, who could easily be waiting around the next corner, and to complete their mission before it is too late. Hollow City will take you on a wild, teeth chattering, fist clenching ride with a twist above all other twists. Get ready to take the ride of your life and feel every emotion all at once.

Hollow City truly threw me for a loop; no pun intended. After finally getting around to reading the first book, years after purchasing it, I was left wanting more and feeling like there was great potential in this series, so I quickly downloaded the second novel and it left me completely stunned. It absolutely blew – my – mind! It took me literally on the most thrilling adventure I’ve read since Harry Potter but slightly more elevated. Miss Peregrine starts on a mature level of complexity and adulthood where all the emotional issues of first loves and insecurities are intermingled with learning about your powers and its full potential. Riggs creates a world that’s believable while still adding a touch of the peculiar. There are true consequences and weaknesses; there are real emotions and character flaws. Insignificant teenage school yard troubles do not exist because there is a much bigger threat out there, and it isn’t waiting for anyone.

The bigger threat just so happens to be the fate of Miss Peregrine and the wights attacking our heroes during a WWII world. As Riggs developed in the first novel, any German soldier could actually be a wight in disguise and could simply use its German façade to capture a peculiar that much quicker and to get away with any means of doing so. Between German wights and falling bombs, I am truly glad that Riggs developed this peculiar world around the war in Europe. The emotions I already had from learning of the horrors and fears of WWII were easily applied to Miss Peregrine’s world. It is probably the first book in a while, where I was unable to keep the tears, building up in my eyes, from streaming down my face. Hollow City is definitely a fantastic read and worth investing your time and heart. Thank goodness the third installment, Library of Souls, comes out in September. I do not think I would be able to contain myself if I had to wait another year. It is also conveniently enough time for anyone who has yet to read the first and/or second novel to dive in before the third hits the shelves (hint hint).