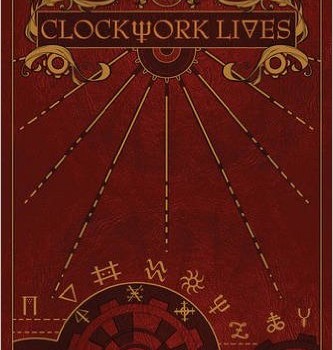 At first you will hate me for this. Then you will love me.

When I first started reviewing, I asked certain people if they had anything they would like me to look at. I’m slowly working through the list of suggestions. One of the books I got was Clockwork Lives by Kevin J Anderson, to be released on September 15. Kevin said, “It’s probably my very best.” When a man like Kevin J Anderson, who has been in the industry nearly thirty years and who has published over a hundred titles, says that, you know  you’re in for something special. It did not disappointing.

Marinda Peake, like many of the people who live in the land of Albion, lives a perfectly ordered life. She has her schedule, which she adheres to so strictly that even something as simple as not being able to get her groceries on Wednesday is cause for major concern. Her life is turned upside down when her father, a brilliant alchemist, succumbs to a lingering illness and dies. According to his will, his house is to be sealed and his accounts frozen. Among the few possessions he leaves Marinda are an empty book and a drop of his own blood. Following instructions, Marinda puts the blood onto the first page. Through her father’s alchemy, the blood becomes letters, filling several pages with his life story and revealing past sharply different from the quiet man she’d known. Marinda is instructed to collect stories to fill the book. Only when that’s done will she gain her inheritance, but she quickly discovers a problem. In a world where people’s lives are so ordered, most people’s story can be told in a line or two. She has to leave her sleepy town to find those people, like her father, who have, for one reason or another, lived lives apart from the near universal structure. Her travels take her to Crown City and the court of the enigmatic Watchmaker, and eventually to the continent of Atlantis as she searches for stories beyond the few lines that describe most people, for the epic stories.

Clockwork Lives is an amazing collection of stories that brings the world to life. It paints a picture of an orderly world but with almost limitless wonder hiding beneath the surface. Each story produces its own unique draw, and the framing story, that of Marinda Peake, shows a young woman learning what it truly means to live. This is a fantastic book.