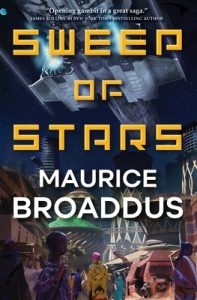 “The beauty in blackness is its ability to transform. Like energy we are neither created nor destroyed, though many try.” – West African Proverb

The Muungano empire strived and struggled to form a utopia when they split away from old earth. Freeing themselves from the endless wars and oppression of their home planet in order to shape their own futures and create a far-reaching coalition of city-states that stretched from Earth and Mars to Titan.

With the wisdom of their ancestors, the leadership of their elders, the power and vision of their scientists and warriors they charted a course to a better future. But the old powers could not allow them to thrive and have now set in motion new plots to destroy all that they’ve built.

In the fire to come they will face down their greatest struggle yet.

Amachi Adisa and other young leaders will contend with each other for the power to galvanize their people and chart the next course for the empire.

Fela Buhari and her elite unit will take the fight to regions not seen by human eyes, but no training will be enough to bring them all home.

Stacia Chikeke, captain of the starship Cypher, will face down enemies across the stars, and within her own vessel, as she searches for the answers that could save them all.

The only way is forward.

While I’d never read anything by Maurice Broaddus before I received this book, I know a lot of people who love him so I was pretty excited when my copy of this book arrived in the mail. It’s not been a few weeks since I finished Sweep of Stars and I have to say that my feelings about this book are still fairly mixed. I mean, the writing was fantastic and I love Afrofuturism as a genre so I absolutely loved the story but there were also a couple of issues I had with this book that kept me from immersing myself completely in the story like I usually do.

I do have to say that there were honestly too many things that I loved about Sweep of Stars to properly list them all so I’ll just have to stick to a couple of the ones that really stood out to me. First and foremost was the setting and the ridiculous amount of worldbuilding that had to go into creating it. I mean in Sweep of Stars we get some of the most believable galaxy-spanning empires and cultures that I’ve seen in science fiction. I’ve mentioned before on here that I’m not normally a fan of science fiction but every time I read a book with this amount of detail put into it I tell myself I need to branch out more in the genre.

The second thing that really stood out to me is somewhat similar to the first and that is all the great characters we get introduced to over the course of this book. I don’t think there was a single one that didn’t feel so real that they could have lept off the page into the real world. I’m looking forward to reading the next book in this trilogy so that I can see the continuation of everyone’s story.

Now comes the part I always struggle with the most in my reviews and that’s talking about what I didn’t like about this book. While there’s only one thing I didn’t really like about this book I found it to be kind of a big thing and that is the way some of the viewpoints switch voices. It may be because I wasn’t expecting it, but it completely threw me off when some of the characters were written in the third person, some in the first, and one in the second. Every time a switch happened I had to completely shift gears mentally and it usually broke the immersion I was experiencing at the time.

Happily, the things I enjoyed FAR outweighed what I didn’t and I can’t wait for the next book in the trilogy and I wouldn’t hesitate to recommend this to anyone looking for something new to read, though I would warn them about the way it switches between points of view and voices throughout the book.