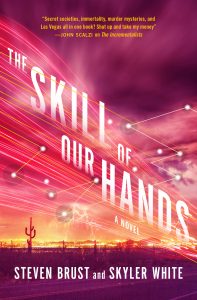 The Incrementalists are a secret society of two hundred people; an unbroken lineage reaching back forty thousand years. They cheat death, share lives and memories, and communicate with one another across nations and time. They have an epic history, an almost magical memory, and a very modest mission: to make the world better, a little bit at a time.

In THE SKILL OF OUR HANDS, Phil, the Incrementalist whose personality has stayed stable through more incarnations than anyone else’s, has been shot dead.

They’ll bring him back—but first they need to know what happened. Their investigation will lead down unexpected paths in contemporary Arizona, and bring them up against corruption in high and low places alike. But the key may lay in one of Phil’s previous lives, in Kansas in 1859, and the fate of a man named John Brown.

I’m going to say right off the bat that The Skill of Our Hands by Steven Brust and Skyler White was probably one of the weirdest books I’ve read in a long time. It was also one of those books that while I enjoyed it, I still struggled to finish reading it. Normally when I open a new book I’m unable to put it down until I’ve finished it or I’m too tired to read, but with The Skill of Our Hands, I had to take breaks to digest what I had read and to take a brief break from the story. Though I have to admit I’m already considering a reread of the book and it’s only been a few days since I finished it.

I think The Skill of Our Hands has a lot going for it and that there is a lot about it that makes me want to recommend it to people. I thought the story was well-written with just enough twists and turns to keep you interesting and guessing what was going to happen next without beeing too confusing. The characters Phil and Ren were really fun to read about and I thought Brust and White did a fantastic job of fleshing them out and turning them into believable characters. It was easy to empathize with them and to root for them no matter what they were doing. This was a fascinating world and characters to read about so I’m hoping this wasn’t the end of the series.

Despite enjoying it as I did, I really did struggle to finish it at times and I think I’ve mostly narrowed down what those were to a couple of things. I liked the Incrementalists but I didn’t like how little information we got on their abilities and how they work. I’m the kind of person who needs to know how a magic system works to really appreciate and enjoy it. I also found myself bothered by the narration format that was used in the book. The way it jumped back and forth between characters and between time periods was a bit too hard for me to follow at times. I found myself momentarily confused a time or two and can’t help but feel like the viewpoints could have been handled a bit better.

Despite my struggles with it, I really did enjoy the Skill of Our Hands and I’m going to be suggesting it quite a bit to anyone looking for something new or interesting to read. I’ll also be reading the first book in the series as I didn’t realize this one was a sequel until I had finished it and I’ll be keeping an eye out to see if any new books release in the future.