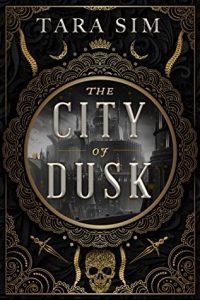 Set in a gorgeous world of bone and shadow magic, of vengeful gods and defiant chosen ones, The City of Dusk is the first in a dark epic fantasy trilogy that follows the four heirs of four noble houses—each gifted with a divine power—as they form a tenuous alliance to keep their kingdom from descending into a realm-shattering war.

The Four Realms—Life, Death, Light, and Darkness—all converge on the city of dusk. For each realm there is a god, and for each god there is an heir.

But the gods have withdrawn their favor from the once vibrant and thriving city. And without it, all the realms are dying.

Unwilling to stand by and watch the destruction, the four heirs—Risha, a necromancer struggling to keep the peace; Angelica, an elementalist with her eyes set on the throne; Taesia, a shadow-wielding rogue with rebellion in her heart; and Nik, a soldier who struggles to see the light— will sacrifice everything to save the city.

But their defiance will cost them dearly.

I was honestly a little bit hesitant to start this book when I received the audiobook of it a few weeks ago, as I didn’t realize it was supposed to be grimdark and I’m honestly not the biggest fan of the genre. I’m glad I had already agreed to review it though because I found The City of Dusk by Tara Sim to be a great story that I was unable to stop listening to once I had started. The only times I stopped listening to the book were when I had to sleep and when my headphones went dead from listening for so long.

This book had just about everything I usually want or expect from a new book. It has detailed worldbuilding, complex characters that you can’t help but love (or hate!), an interesting elemental magic system, and a fantastic narrator. I don’t want to get into the plot or why I enjoyed it as much as I did because I don’t think I can do so without spoiling major plot points, so I will just say that the story is great and each chapter ended in such a way that I had to keep listening just to find out what happened next. I also really enjoyed the dynamics between all the various characters, especially among the members of the various royal families. My only real complaint is that I feel like the book ran a bit longer than needed and it definitely felt like it was more targeted at a YA audience at the time.

Though what stood out the most about this book (You know, aside from the great characters, fantastic story, and interesting magic system) was Nikki Patel’s narration. When I listen to an audiobook I usually have to bump the narration speed to 1.25x at least, if not 1.50x because I have to do so to be able to enjoy a lot of narrators, but Nikki Patel was just so good that I had to listen at standard speed so I could enjoy it more. I hope she continues narrating the rest of the books and I’ll definitely be checking out some of the other books she narrates sometime soon.

Altogether I thought this was a great audiobook that I wouldn’t hesitate to recommend to anyone looking for something to read. I’ll be impatiently waiting for the next book in the series that’s for sure.

I received a free copy of this audiobook in exchange for an honest review.