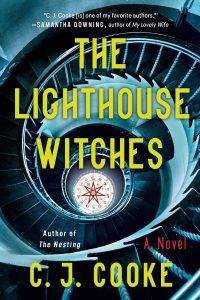 Two sisters go missing on a remote Scottish island. Twenty years later, one is found–but she’s still the same age as when she disappeared. The secrets of witches have reached across the centuries in this chilling Gothic thriller from the author of the acclaimed The Nesting.

When single mother Liv is commissioned to paint a mural in a 100-year-old lighthouse on a remote Scottish island, it’s an opportunity to start over with her three daughters–Luna, Sapphire, and Clover. When two of her daughters go missing, she’s frantic. She learns that the cave beneath the lighthouse was once a prison for women accused of witchcraft. The locals warn her about wildlings, supernatural beings who mimic human children, created by witches for revenge. Liv is told wildlings are dangerous and must be killed.

Twenty-two years later, Luna has been searching for her missing sisters and mother. When she receives a call about her youngest sister, Clover, she’s initially ecstatic. Clover is the sister she remembers–except she’s still seven years old, the age she was when she vanished. Luna is worried Clover is a wildling. Luna has few memories of her time on the island, but she’ll have to return to find the truth of what happened to her family. But she doesn’t realize just how much the truth will change her.

I was honestly a little bit hesitant to read this book when I was offered the chance to do so. I’d never read anything by the author before and it was more than a little outside my normal reading wheelhouse, but it sounded so good and had such a great cover that I was unable to pass it up and I’m glad that I didn’t. The Lighthouse Witches by C.J. Cooke was an intense and satisfying read that kept me flipping through pages all night long. Since I had never read anything by C.J. Cook I wasn’t completely sure what I was getting into with this book so I made the mistake of trying to read a few chapters before bed only to be interrupted by my 5 AM alarm clock telling me it was time to get ready for work. 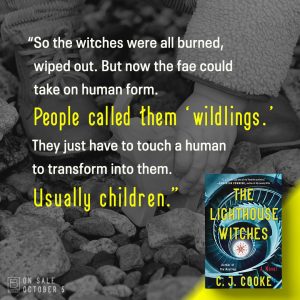 There were a lot of things I loved about The Lighthouse Witches but what really impressed me was how the story was told across three different points of view with each one being set at a different point in time. I thought the author did an amazing job taking all three points of view and timelines and somehow managing to weave them all into an intense and fascinating story. Usually, I find that in books like this I’m more heavily invested in one particular point of view or timeline and miss things in the others as I rush through them to get to the character I really want to read about, but this book had me equally invested in all three. Something that usually only happens with authors like Brandon Sanderson or Robert Jordan.

While I would love nothing more to go on and on about the different story or character elements that I loved in this book, I don’t want to spoil things because I think that it’s always better to go in kind of blind with no set expectations. So all I will really say about The lighthouse Witches is that it was a fun read with an interesting plot and was full of characters whose storylines I was almost immediately invested in. I think anyone who picks up this book will enjoy it like I did, even if it’s not in their usual genre.

I will be recommending this book to a lot of people over the next few months I’m sure and I’ve already bought C.J. Cooke’s The Nesting and I can’t wait to get started on reading that! 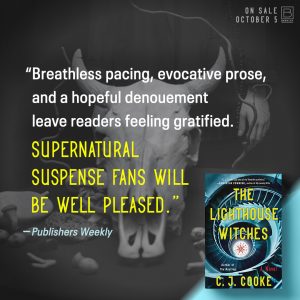