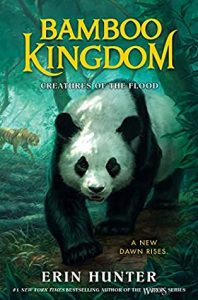 One kingdom. Three worlds. An all-new series packed with high-stakes adventures from bestselling Warriors author Erin Hunter, perfect for fans of Wings of Fire and Endling.

The pandas of the Bamboo Kingdom have never forgotten the great flood that ended the peaceful life they’d always known. But for three young creatures born that day, the flood marks not an end, but a beginning—the beginning of their struggles to find a place in very different worlds.

Leaf, raised in the sparse Northern Forest, works tirelessly to help her family find bamboo to eat; Rain, hot-tempered, refuses to accept a suspicious new leader in her Southern Forest community; and Ghost, clumsy and uncoordinated, worries he’ll never fit in with his hunter family in the mountains.

None of them know that the others are out there, but thanks to a mysterious tiger that’s been threatening the Kingdom, they will soon find each other—and fulfill a prophecy that had been made long before they were born.

This first book of a thrilling new animal adventure series from Erin Hunter is sure to enthrall readers of her other bestselling series. Fans will love having a new universe to immerse themselves in!

As someone who has always been a fan of any series that features animals as the focus of the story, whether it’s the Redwall books or Erin Hunter’s Warriors series, so grabbing a copy of this audiobook when I had the chance seemed like a no brainer. And while there were a couple of things I really didn’t enjoy about this book, for the most part, I think it was a great read and I’m looking forward to the next book in the series when it releases next year. Erin Hunter has proven yet again that they are a group of fantastic authors who really understand the animals they write about.

I feel like ever since Kung-Fu Panda was released back in 2008 that we have gotten kind of flooded with Panda-related books, games, etc that seem to barely have an understanding of Pandas so I was happy to see that this was not the case with Bamboo Kingdom. I know it’s a fantasy story and the pandas can be and do whatever they want in it, but I was glad to see that Erin Hunter clearly did their research on  Panda habitat, behavior, diet, and whatnot. I personally find that it’s the little details like that really adds to the book, especially when you combine it with a fun and well-written plot.

The main issue I had with Creatures Of The Flood was how it switched viewpoint characters every single chapter. I mean, I know that there are three protagonists in the story but I feel like every time I started to get invested in a character the chapter ended and I was suddenly reading about a different character and it just made it take that much longer for me to get fully invested in the story of all three characters. I was too tempted to just rush through the chapters of characters I wasn’t really liking to get to the chapters of the character I enjoyed the most.

Happily, I enjoyed both the story and the narrator of the audiobook were good enough that the parts of the book I disliked were usually overshadowed by everything I enjoyed. I wouldn’t hesitate to buy this book for someone looking for something new to read and I’m already looking forward to the next book in the series.