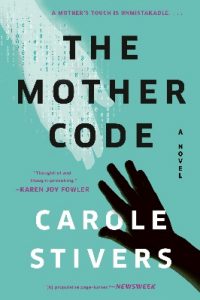 What it means to be human-and a mother-is put to the test in Carole Stivers’ debut novel set in a world that is more chilling and precarious than ever.

The year is 2049. When a deadly non-viral agent intended for biowarfare spreads out of control, scientists must scramble to ensure the survival of the human race. They turn to their last resort, a plan to place genetically engineered children inside the cocoons of large-scale robots–to be incubated, birthed, and raised by machines. But there is yet one hope of preserving the human order–an intelligence programmed into these machines that renders each unique in its own right–The Mother Code.

Kai is born in America’s desert southwest, his only companion his robot Mother, Rho-Z. Equipped with the knowledge and motivations of a human mother, Rho-Z raises Kai and teaches him how to survive. But as children like Kai come of age, their Mothers transform too–in ways that were never predicted. When government survivors decide that the Mothers must be destroyed, Kai must make a choice. Will he break the bond he shares with Rho-Z? Or will he fight to save the only parent he has ever known?

In a future that could be our own, The Mother Code explores what truly makes us human–and the tenuous nature of the boundaries between us and the machines we create.

I remember seeing this book when it was released last year and thinking it sounded interesting, but as I was in the middle of a kind of reading slump I decided not to buy a copy.  So I was excited to get the chance to review the paperback’s release for the blog. I found The Mother Code by Carole Stivers to be a fun and exciting read, even if it was just a little bit scary (In the “this could easily be us one day”, kind of way). I didn’t make it more than a few pages in before I was sucked into the story and kicking myself for not buying it back when it first release.

When  I finally got the time to sit down and read The Mother Code I honestly thought it was just going to be some kind of post-apocalyptic book about robots raising kids and those kids trying to survive in the world. And while it was definitely about those things, I didn’t realize a large part of the story was going to be about a bioengineered virus causing a worldwide pandemic. I was not quite prepared to read about that while we are living through our own real-life pandemic, but it totally made the story that much more realistic and believable to me. One of the things that really stood out to me in this book was how realistic the virus was and how much detail went into everything about it, so I wasn’t surprised at all to find out that Stivers is an actual biochemist.

Something I really enjoyed about this book was the way it jumped back and forth in time and gave us some insight into both the creation of the virus and how they attempted to find a cure for it, as well as showing us what the world was like in the future where they obviously failed to stop it. Though, while I enjoyed reading about the past events, I didn’t really feel myself connect all that much with the characters in those scenes or have any strong feelings about any of them. I did however love (or sometimes hate) all the kids we get to meet in the future as I love reading books about kids or teenagers trying to survive in a world without adults.

All in all, I thought this was a great book, and while there was a lot of scientific jargon and information that flew completely over my head, I still felt like the author did a good job making things understandable to the layperson. I wouldn’t hesitate to recommend this book to people and I’m already planning on buying the audiobook so I can “read” it again!