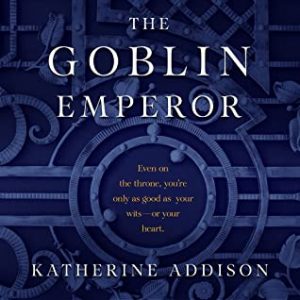 The youngest, half-goblin son of the Emperor has lived his entire life in exile, distant from the Imperial Court and the deadly intrigue that suffuses it. But when his father and three sons in line for the throne are killed in an “accident,” he has no choice but to take his place as the only surviving rightful heir.

Entirely unschooled in the art of court politics, he has no friends, no advisors, and the sure knowledge that whoever assassinated his father and brothers could make an attempt on his life at any moment.

Surrounded by sycophants eager to curry favor with the naïve new emperor, and overwhelmed by the burdens of his new life, he can trust nobody. Amid the swirl of plots to depose him, offers of arranged marriages, and the specter of the unknown conspirators who lurk in the shadows, he must quickly adjust to life as The Goblin Emperor. All the while, he is alone, and trying to find even a single friend… and hoping for the possibility of romance, yet also vigilant against the unseen enemies that threaten him, lest he lose his throne – or his life

This is one of those books that I’ve been telling myself for years now but just haven’t taken the time to sit down and read. I’ve never been able to say why I’ve been so hesitant to read this book but when I saw the audiobook on Netgalley I knew it was time to finally give it a try and boy am I glad that I did. The Goblin Emperor by Katherine Addison was such a good and fun read that I’m still kicking myself for taking so long to read it. Next time I’ll listen to pretty much the fandom when pretty much everyone says a book is so good.

One of the main things that I loved the most about The Goblin Emperor is that instead of being some sort of epic quest story or a story about a massive, potentially world-ending war, it’s instead a more focused and personal story about a half-goblin named Maia and his unexpected rise to the emperor of an elven kingdom. I always find it to be a nice change of pace when I stumble across an author who doesn’t think every book or story needs to be epic fantasy. Honestly one of the first thoughts I had about this book when I finished reading it is that it’s something that I know I would have absolutely loved as a kid or teenager. It reminds me of the books that really got me sucked into reading when I was growing up and I find that it has this kind of old-school fantasy vibe that I think has been missing from the genre for quite a while now.

One of the main reasons I finally broke down and decided to give this book a chance is that it’s the audiobook version and I find it easier these days to sneak in some listening than I do to find the time to sit down and read. I’ve somehow never listened to anything narrated by Kyle McCarley but I’m happy I can say that is a great narrator! He did a fantastic job bringing The Goblin Emperor to life for me and I’m now looking forward to listening to more books by him in the near future.

I would 100% recommend this book to anyone looking for something new to read, especially if they’re looking for a kind of throwback to when the genre was a bit more simpler and small-scale. Another great thing about this book is that despite recently getting a sequel, it is very much a stand-alone story. I feel like it’s way too often these days the books we are getting are these massive series that we won’t see the end of for a decade or two, so it’s nice to read a book where you can just set it down and be done when it’s over.

I received this story in exchange for an honest review.