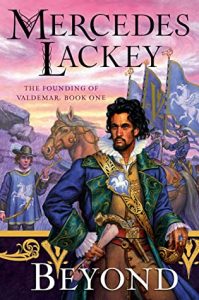 The long-awaited founding of Valdemar comes to life in this new series from a New York Times bestselling author and beloved fantasist.

Within the Eastern Empire, Duke Kordas Valdemar rules a tiny, bucolic Duchy that focuses mostly on horse breeding. Anticipating the day when the Empire’s exploitative and militant leaders would not be content to leave them alone, Korda’s father set out to gather magicians in the hopes of one day finding a way to escape and protect the people of the Duchy from tyranny.

Kordas has lived his life looking over his shoulder. The signs in the Empire are increasingly dire. Under the direction of the Emperor, mages have begun to harness the power of dark magics, including blood magic, the powers of the Abyssal Planes, and the binding and “milking” of Elemental creatures.

But then one of the Duchy’s mages has a breakthrough. There is a way to place a Gate at a distance so far from the Empire that it is unlikely the Emperor can find or follow them as they evacuate everyone that is willing to leave.

But time is running out, and Kordas has been summoned to the Emperor’s Court.

Can his reputation as a country bumpkin and his acting skills buy him and his people the time they need to flee? Or will the Emperor lose patience, invade to strip Valdemar of everything of worth, and send its conscripted people into the front lines of the Imperial wars?

Man, I honestly don’t even know where to start with this review, I mean, where do you start with a review for a story that you’ve probably been waiting 20 years to read? I’ve been a fan of Mercedes Lackey’s since I was first introduced to Arrows of the Queen by the librarian at the library across the street from my house. Since then I’ve read every book Misty has written as well as all her short stories and shorty story collections. In all that time the one story I wanted to read the most was the one I thought we would never get — the foundind of Valdemar and the creation of the Heralds.

Now, for anyone who doesn’t know much about the Valdemar (the country) or Velgarth (the world) books, they span something like a 2,500-year time span, from the “pre-history” Blak Gryphon trilogy which were set around 1,000 years before the founding of Valdemar to Darians Tale which takes place 1,400ish years after the founding. So while there are a lot of different stories told over the course of that 2,500 years, the one story that I think most fans wanted but never expected to get was the founding of Valdemar. Misty has always insisted that it was a story better left untold, so I don’t know if I have words to properly convey just how fucking excited I was to find out that we were finally going to get a book or trilogy about the founding of Valdemar.

Normally when I start a book I’ve been waiting this long for or that I’m this excited for I’m a little bit hesitant to start it out of fear it won’t meet my expectations but honestly I had no doubt at all it was going to be fantastic. Beyond by Mercedes Lackey is not only everything I expected or wanted from a story about the founding, but it was so much better than I ever expected. Over the last 30+ Valdemar/Velgarth books we’ve gotten a lot of information about Baron Valdemar and the events leading up to the founding so I really didn’t think there would be a lot in this book that surprised me, but boy was I wrong.

Like always I don’t want to spoil things for people but let me tell you that no matter how excited you are for this book, you aren’t excited enough. I found Beyond to be absolutely amazing and I feel like every chapter had something new and surprising in it. I can’t tell you how many times I was so certain that I knew what was going to happen next only to be completely surprised by what actually happens. Please just trust me when I say that Beyond is the story about the founding of Valdemar that we’ve all been wanting and waiting so long for and that it is completely worth the money and time.

One of the nice things about this book is that despite being something like the 30th book set on Velgarth, I think it is the perfect spot for new readers to jump in. I loved Beyond and I can’t wait for the next book in the series to find out exactly how we get from where Beyond started to the Valdemar I love so much.