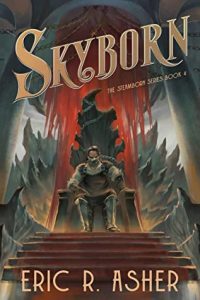 A king denied. A princess restored. A victory undone.

Ancora’s survival came at a great cost, and the reconstruction is an endless task for those who remain. Jacob and Alice explore what’s left of the Lowlands, discovering the lost journals of Charles von Atlier in the rubble. Between those leatherbound covers, Jacob finds a secret that could help him rebuild Ancora, but first it will lead him back to the desert city of Midstream.

Joining Mary on the Skysworn, Alice travels to Belldorn. There she encounters an unexpected ally, and threads of a rumor that carry her across the Crystal Sea. Pirates and rebels are just the beginning of her troubles as the King of Fel proves he has no intention of allowing the defeat in Dauschen and Ancora to go unanswered.

Conflict spreads into the desert as dark forces threaten to crush all that remains of the lives Jacob and Alice once knew. To protect their people, allies new and old must stand together, or a long forgotten enemy will swallow them all.

It’s hard to believe that it’s already been six years since I first requested a copy of Steamborn on Netgalley. In that time I’ve quite a few steampunk books in an attempt to find one that could even come close to Steamborn. Happily, I can say that after 6 long years of looking for a new steampunk book I enjoyed as much Steamborn by Eric R. Asher, I finally managed to find one. Skyborn by Eric R. Asher is everything I wanted and hoped for in a continuation of the Steamborn series and even as I write this I know I don’t have the words to do a review of this book justice.

One of the things I can still remember really standing out about the original Steamborn trilogy was how richly detailed the world and characters were. So I was pretty excited to see just how Eric Asher expanded on the world and its characters and I have to say that I thought he knocked it out of the ballpark. It’s been weeks since I finished this book and I’m still processing all the new information we learned and processing everything that happened. If it wasn’t for how busy I’ve been with work lately I imagine I would have read this book half a dozen times by now and probably have still picked up on something new in every reread.

While Jacob is easily still my favorite character in the series, I loved that we were introduced to so many new and great characters who really added to the story. I also really felt like Alice truly came into her own in Skyborn and I would say that her viewpoint chapters were probably some of my favorite chapters in the entire book. I felt like a lot of her growth was dependent on Jacob in the original trilogy so it was really nice to see her kind of get her own little solo story arc over the course of the book.

All in all, I thought Skyborn was an absolutely fantastic book that I was unable to put down once I had picked it up. I can’t wait to see what is in store for Alice, Jacob, and all of their friends in the next book in this trilogy. I’m also excited to see that Saskia Maarleveld narrated the audiobook and I’ve already bought my copy to listen to because she is easily one of the best narrators in the business.