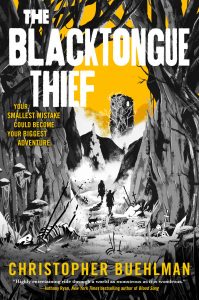 Kinch Na Shannack owes the Takers Guild a small fortune for his education as a thief, which includes (but is not limited to) lock-picking, knife-fighting, wall-scaling, fall-breaking, lie-weaving, trap-making, plus a few small magics. His debt has driven him to lie in wait by the old forest road, planning to rob the next traveler that crosses his path.

But today, Kinch Na Shannack has picked the wrong mark.

Galva is a knight, a survivor of the brutal goblin wars, and handmaiden of the goddess of death. She is searching for her queen, missing since a distant northern city fell to giants.

Unsuccessful in his robbery and lucky to escape with his life, Kinch now finds his fate entangled with Galva’s. Common enemies and uncommon dangers force thief and knight on an epic journey where goblins hunger for human flesh, krakens hunt in dark waters, and honor is a luxury few can afford.

I have to be honest and say the only reason that I read this book was that I’m a huge fan of Christopher Buehlman’s horror books. Despite the fact that I’ve reviewed the genre quite a bit lately, I’m not a huge fan of grimdark fantasy and this book looked and sounded like it was part of the genre. So I’m a bit surprised to say that I loved The Blacktongue Thief and could not stop reading until it was over. I mean that I legitimately tried to stop reading a few times to do other things like watch TV or play a video game but my desire to know what was going to happen next kept me from doing anything else.

While there is quite a bit about The Blacktongue Thief that I loved, what really stood out to me were its fantastic characters. I absolutely loved Kinch Na Shannack, Galva, and everyone else (Both human and otherwise) that they interact with over the course of the book. I found Kinch to be a terrible thief who is always getting in over his head and having run-ins with people who could probably smack him down without much of a thought and I loved every minute of it. I can’t tell you how many times I laughed out loud at something Kinch or Galva did over the course of the book.

The other thing that I think really made me love The Blacktongue Thief was how Buehlman took a bunch of fantasy tropes and completely turned them on their head in various ways. Yes, there are things like goblins, witches, and magic in The Blacktongue Thief but they almost never appeared or acted in a way I’ve seen before, which was great. I think it’s rare to see an author put a unique spin on tropes that have been around for 50+ years so it’s always nice to see when it happens.

I wouldn’t hesitate to buy The Blacktongue Thief for friends or family and can’t wait to see what happens in the next book. Though I do have to say that while it’s clear that The Blacktongue Thief is the first book in a series, it works surprisingly well as a stand-alone book for anyone who may be worried about starting yet another series.