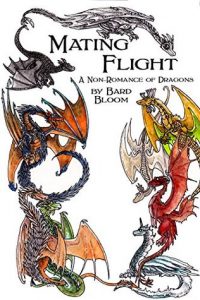 It’s finally time for Jyothky and eight other misfit adolescent dragons to go off to an unexplored, dragon-free universe and decide who will marry whom. They’re astral dragons, mighty and arrogant, with devastating breath weapons and vast magical powers, and they’re not even there to conquer the place. What kind of trouble could the natives possibly be — even civilized and technologically sophisticated natives? Or the mind-controlling parasite worms, or the undead god, or any of Hove’s other surprises?

…Maybe quite a lot of trouble, but not as much as they will bring upon themselves.

Dragons have become more popular, and like any popular topic, it becomes filled with very similar feeling dragons and novels rapidly. It is rare for dragons to feel like a real, alien mind, in a creature removed from the human perspective. Bard Bloom excels at exploring the minds and perspectives of non-human protagonists in his works, and Mating Flight is among the best of his works regarding this. Dragon society is complex and filled with strict etiquette and rules of behavior. I would liken it to human nobility throughout the ages with social niceties being critical to dragon interactions. Paired with the aforementioned dragons being immensely powerful and prone to resolving problems with violent clashes.

As the title suggests, our prestigious narrator and protagonist is the dragoness, Jyothky, setting off on their mating flight to determine their future husband. They are uncertain how to feel about this, having little interest in any aspect of this concept. The personality of Jyothky is established quickly, and she is a fascinating and enjoyable perspective to explore the world through. The characters somehow manage to be sympathetic despite being immensely powerful world conquerors. This comes from the depth of character relationships and interactions. Each of the characters develops distinct bonds with one another. The development of these relationships throughout the story is masterfully handled.

So many diverse issues and topics are present within this book, which is sure to interest anyone who enjoys exploring such things in detail. I would recommend this book and author to anyone who like fantasy worlds and societies, as well as detailed worlds and fully realized characters. Bloom takes new and wonderful approaches to fantasy tropes, and I hope we can see more of their work in the future.