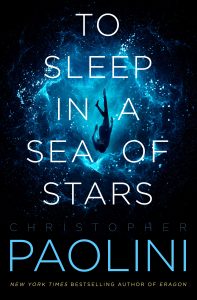 During a routine survey mission on an uncolonized planet, Kira finds an alien relic. At first she’s delighted, but elation turns to terror when the ancient dust around her begins to move.

As war erupts among the stars, Kira is launched into a galaxy-spanning odyssey of discovery and transformation. First contact isn’t at all what she imagined, and events push her to the very limits of what it means to be human.

While Kira faces her own horrors, Earth and its colonies stand upon the brink of annihilation. Now, Kira might be humanity’s greatest and final hope

I’ve got to be honest here and admit that I was never a big fan of Eragon or any of the rest of the books in the Inheritance Cycle when I was growing up. So I was a little bit surprised at just how excited I was when I found out earlier this year that Paolini was going to be releasing a science fiction book. I’ve been trying to read more of the genre these days so I knew I was going to have to give this book a try and boy am I glad that I did. To Sleep in a Sea of Stars by Christopher Paolini was a fantastic read that I was unable to put down once I had started listening to it.

So once of the things I’ve discovered over the last couple years is that it’s not science fiction that I’m not really a fan of but more specifically “hard” science fiction. So I was glad to find that To Sleep in a Sea of Stars was fairly light on the science aspect of the genre and instead focused more on telling a fun and interesting story. While I don’t have many preferences for the genre one of the things I really do enjoy reading about is first contact and how humanity might respond to discovering they weren’t alone in the universe. Add to that great characters like Kira Navarez and some really great worldbuilding and it’s like this book was written just to rope me in.

I do think that one of the reasons I was so excited to receive this book is because it’s one of the first audiobooks I’ve been sent to review. I don’t think I’ve listened to anything narrated by Jennifer Hale before and I’m going to have to remedy that quickly because I thought she was fantastic. She really managed to bring this book alive for me by somehow giving every character their own unique voice and breathing a lot of life and emotion into them with her narration. I can easily see her becoming one of my favorite narrators.

I wouldn’t hesitate to recommend this book to anyone looking for something new to read or listen to and I’m really hoping that we get more books like this from Christopher Paolini in the near future.