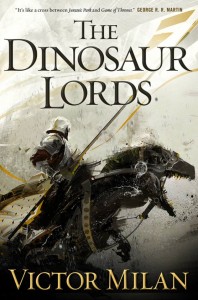 A world made by the Eight Creators on which to play out their games of passion and power, Paradise is a sprawling, diverse, often brutal place. Men and women live on Paradise as do dogs, cats, ferrets, goats, and horses. But dinosaurs predominate: wildlife, monsters, beasts of burden – and of war. Colossal planteaters like Brachiosaurus; terrifying meateaters like Allosaurus and the most feared of all, Tyrannosaurus rex. Giant lizards swim warm seas. Birds (some with teeth) share the sky with flying reptiles that range in size from batsized insectivores to majestic and deadly Dragons.

Thus we are plunged into Victor Milán’s splendidly weird world of The Dinosaur Lords, a place that for all purposes mirrors 14th century Europe with its dynastic rivalries, religious wars, and byzantine politics…and the weapons of choice are dinosaurs. Where we have vast armies of dinosaur-mounted knights engaged in battle. And during the course of one of these epic battles, the enigmatic mercenary Dinosaur Lord Karyl Bogomirsky is defeated through betrayal and left for dead. He wakes, naked, wounded, partially amnesiac – and hunted. And embarks upon a journey that will shake his world.

I discovered this book while browsing through Amazon and Goodreads in an attempt to find something new to read, and I knew the moment I saw the cover that I had to read it. I didn’t even need to read the blurb describing the book to know I was going to judge it. The cover is just that beautiful. I normally don’t judge a book by its cover but I made an exception for The Dinosaur Lords. I was lucky enough to receive an advance copy of the book to read and after finishing it I can only ask one question. Why hasn’t anyone thought to write something like this before?

I find myself getting a little bit burnt out on fantasy these days, as everything I read seems to follow the same formula and use the same tropes and cliches. The Dinosaur Lords was a really fun book to read, simply for the fact that I don’t think I have read anything like it before. Victor Milán doesn’t seem to be afraid to step outside the box a little and write something different. It really feels like Milán has created a whole new sub-genre here and I would not be surprised to see similar books popping up all over the place due to its success — and trust me, I think this book will succeed in a big way.

I won’t say much about the plot as I do not want to ruin it for anyone interested in reading it, but I will say this. The Dinosaur Lords was absolutely ridiculous, and probably one of the weirdest books I have read in a long time. This is not a bad thing, in a genre that has gotten a bit stale I think a bit of ridiculous weirdness is just what the doctor ordered. I was unable to put it down from start to finish and have already read through it a second time.

In addition to being weird and ridiculous I also found this story to be really fun. How could it not be when it is full of dinosaurs and the men and women crazy enough to tame and use them as animals of war. The author may have taken some liberties with the names of the dinosaurs but with the descriptions it is pretty clear what each and every one of them is. He did also did an excellent job fleshing out the world around these awesome animals and giving every character and location a depth you don’t usually see in a first book.

As I said about I can’t believe anyone though to write something like this sooner. When I think of all the missed opportunities out there it makes me a little sad. I am already looking forward to the next book in the series, although I have absolutely no idea how Milán will manage to top the first. I don’t know how I will make it through a whole year while wondering what the hell comes next in the story. That is the one bad thing about receiving books early is you have even longer to wait before the next in a series.

I really can’t think of anyone who wouldn’t enjoy this book, even if they are not big readers of fantasy. Why wouldn’t anyone want to read a book full of dinosaurs, dinosaur knights, political intrigue, murder and sex?