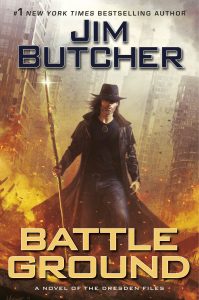 THINGS ARE ABOUT TO GET SERIOUS FOR HARRY DRESDEN, CHICAGO’S ONLY PROFESSIONAL WIZARD, in the next entry in the #1 New York Times bestselling Dresden Files.

Harry has faced terrible odds before. He has a long history of fighting enemies above his weight class. The Red Court of vampires. The fallen angels of the Order of the Blackened Denarius. The Outsiders.

But this time it’s different. A being more powerful and dangerous on an order of magnitude beyond what the world has seen in a millennium is coming. And she’s bringing an army. The Last Titan has declared war on the city of Chicago, and has come to subjugate humanity, obliterating any who stand in her way.

Harry’s mission is simple but impossible: Save the city by killing a Titan. And the attempt will change Harry’s life, Chicago, and the mortal world forever.

I know that I probably start off every review I do of the Dresden Files talking about how big of a fan I am of the series and how I always think Butcher can’t surprise me anymore, only to then go on about how much he managed to surprise me with whatever Dresden Files book I’m reviewing. Well, Hot damn but this was such a good book, and boy did Jim manage to surprise me over and over again with it. Battle Ground was an emotional rollercoaster of a ride that I was unable to put down fro the very first page. I actually read it twice in a row and both times it somehow managed to keep me up reading until like 4 AM because I needed to see how everything ended, despite knowing exactly how it ended on the second read!

While I really enjoyed Peace Talks and haven’t really understood the complaints about it that I saw that it didn’t feel like its own book, because it did to me, but man did Battle Ground manage to just completely blow it out of the water. I don’t know how he managed it but Butcher took pretty much every major character and concept from the series and somehow managed to cram them into a single amazing story. Peace Talks made it clear that the stakes for Harry and the supernatural community were extremely high but Battle Ground really did a fantastic job both showing how high and really making us (or at least me!) feel the stress, fear, and anxiety of those stakes. I honestly don’t think I could have turned the pages any faster in my attempt to figure out how everything was going to end.

There is so much that I enjoyed about this book that I want to talk about and discuss but I don’t think I can really do so because it’s all fairly huge spoilers that I think will have a huge impact on the series going forward and I don’t want to chance ruining it for anyone. Let’s suffice it to say that Battle Ground has changed the world for Harry and the supernatural community that makes what Changes did completely pale in comparison. This was probably one of the few books I’ve read in a long time that made me laugh, cry, cheer, and yell at certain characters in anger in a long time. It’s been a few weeks since I finished it and I still can’t get everything that happened out of my head.

For the longest time I would say that Proven Guilt was my favorite book in the series, and while that may still be true, Battle Ground is definitely giving it a run for its money. I can never stress enough how much I’ve loved the Dresden Files over the years and would recommend it to anyone looking for something amazing to read. It has some of the best worldbuilding and foreshadowing in the entire genre.

I received a copy of Battle Ground in exchange for an honest review.