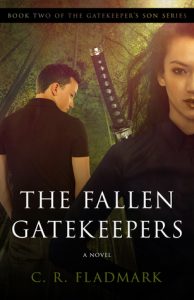 He went to the realm where no one with a pure heart should go. Yet he survived.
He dared to speak to the gods. And the gods spoke back.
His blood still carries the poison that should have killed him.

Sixteen-year-old Junya survived his battle with the Evil Ones, but his energy is weighed down by a powerful darkness. The Gatekeepers of Izumo Oyashiro are reluctant to let him back into their realm. His own mother watches him with a wary look.
Only Shoko – the deadly warrior who dresses like a Japanese schoolgirl – stands by him. And all Junya wants now is a way to introduce his ancient guardian of the gods to modern romance.
But the Evil Ones aren’t done with them yet. Someone in Junya’s world is murdering the shamans of the Earth’s ancient religions. Without their worship, the gods grow weak, and the Gatekeepers are in danger.
It will take a bold and unconventional plan to save Izumo.
The rules that have governed Gatekeepers for centuries are about to change.
But will it be worth the cost?
Don’t miss the second installment of the award-winning Gatekeeper’s Son series, which Kirkus Reviews describes as “adept world building [and] skillful character development…filled with magic, mayhem, and intrigue.

I really enjoyed the first book in this series so I was pretty excited to receive my copy of this book in the mail a couple weeks ago. I’m glad I can say that I wasn’t disappointed at all. I thought The Fallen Gatekeepers was a fast-paced and exciting read with enough twists and turns that I was never quite sure what was going to happen next. I once again made the mistake of starting this book before bed and ended up reading it in a single sitting, I ended up going to work the next day on no sleep at all. I would honestly say it was worth being tired for my entire shift.

I think C.R. Fladmark is an excellent author who managed to take everything I enjoyed about The Gatekeeper’s Son and expanded upon it. The story was well written and engaging enough that I was unable to put it down once I had started reading it. It was one of those books where I had to know what was going to happen next at the end of every chapter. If I had to choose one thing that I thought really stood out about this book it would be how much Junya and his friends have grown as characters. The characters were my favorite part of the last book and I thought Fladmark did a great job delving deeper into the characters and expanding upon them.

My biggest complaint about the previous book was how much legalese the story contained and how difficult it was to follow the story at times. happily, C.R. Fladmark left most of that out this time and I thought the story flowed a lot better without it. The only thing that bothered me while reading this book was that every foreigner was portrayed in a fashion stereotypical to whatever country they were from. I thought those characters could have been handled a bit better.

All in all, I would say this was a much better book that it’s predecessor and I would happily recommend it to anyone looking for something to read. Though I would suggest that anyone who goes to read it should read The Gatekeeper’s Son first unless they want to be a bit lost as to what’s going on at times.