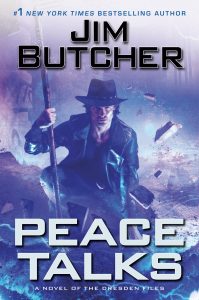 When the Supernatural nations of the world meet up to negotiate an end to ongoing hostilities, Harry Dresden, Chicago’s only professional wizard, joins the White Council’s security team to make sure the talks stay civil. But can he succeed, when dark political manipulations threaten the very existence of Chicago–and all he holds dear?

It’s always a little crazy when I think about it and realize that it has been 15 years since I first stumbled across the Dresden Files at the tiny little independent bookstore just down the street from my house. You would think that after the first 10 books or so that I would stop being surprised by how Butcher somehow manages to make every book better than the previous ones in the series. I’m happy that I can say that while it has been a long 6 years since the release of Skin Game that it has been well worth the wait. Peace Talks is a fantastic addition to the Dresden Files that is full of as much intrigue, action, snark, and ridiculousness as you would expect from a book following someone like Harry Dresden.

I will say that I was honestly a little bit worried when I first started reading this because as amazing as I thought Skin Game was, it left a lot of questions and loose ends that I wanted to see answered. Luckily Peace Talks does a surprisingly good job of not only answering most of the questions I had about characters like Bonnie, Maggie, and Butters, but it also answers couple questions I’ve had and gives us couple scenes that I’ve been waiting for since the first time I read Storm Front. So not only do we get all the action and magic that we expected from the Dresden Files, we get a lot of new lore, worldbuilding, and answers as well!

One of the big things that I  (and a lot of other people I’m sure!) was worried about with this book is that it would feel like half a book since it ended up having to be split into two separate books. Honestly, though, it doesn’t feel like that at all too me. I may be noticeably shorter than the last few books in the series and end on a cliffhanger that helps set the stage for Battle Ground, but it still feels like its own story with a clear beginning, middle, and end. I don’t know that I would realize it was one half of a book that was split into two if Jim wasn’t so open with us about it.

Peace Talks met all my expectations and I enjoyed it as much as I expected to if not more so and I still wouldn’t hesitate to recommend this entire series to everyone I know. Normally this is where I would lament about how long it was going to be until the next book in the series releases and talk about how I don’t know how I’ll manage to get through the wait, but Battle Ground comes out in just over 2 months! We get two Dresden Files books this year and I think that is just fucking amazing.