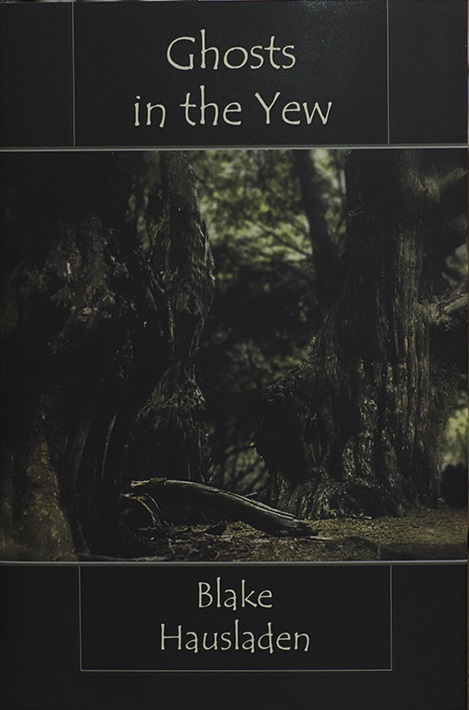 A novel of violent magic, intrigue, and statecraft, Ghosts in the Yew is the story of four who are banished beyond the edge of the map to a land of gnarled forests, ancient magic, and the site of a terrible murder. Their struggles to survive will put them at odds with their families, their nation, and the very powers that shaped the world.

I have decided that when everyone you meet at a convention is telling you to meet this author and to read his book that you should definitely listen to them. I was worried that they had set the bar just a little too high with everything they had said about it, but I’m glad I was not disappointed in the least. I think Blake Hausladen is going to be an author to keep an eye on, his first book Ghosts in the Yew was everything people told me it would be and more. It has been weeks since I finished it and I still catch myself drifting off into daydreams about it as I walk to or from work.  Ghosts in the Yew is what I wish every self-published book I’ve read could be.

I don’t know if it’s what the author intended, but at its heart I found this book to be the coming-of-age story of Barok, one of the many selfish and self-centered princes of Zoviya. When one of Barok’s political schemes to ruin his brother Yarik goes awry Barok finds himself exiled to the the long abandoned and ill kept  boundaries of the kingdom. He’s joined by his new drunken Alsman Leger and the beautiful but naive Dia as they struggle to survive without the support of the rest of the kingdom and they soon find themselves preparing to fight a secret war at the same time.

One of the most interesting aspects of this book for me was the fact that is told in the first person, but from the perspective of four separate point of view characters, something I don’t think I’ve seen done outside of a few YA books. I was a bit worried that the view points would just blend together and I would find myself struggling to keep track of who’s view point I was reading at the time, but Blake does a great job of giving each of the characters their own unique voice that stands out from each of the others.

I found it just a little too easy to get lost in the story that Ghosts in the Yew was telling, which to me, is one of the greatest signs of a good story and author. I remember sitting down to read a little bit of the story and get an early feel for what I would think of it and got hooked. Fast forward five or six hours and you would see the panic set in when I realized I had to be to work in just a couple more hours. It was not the panic for the lack of sleep though, it was the panic that sets in when I realize I would have to stop reading a good book and go join the real world once again. I really did not want to be left wondering just how the story ended all day at work.

.I ended up taking the book with me to read on my lunch break– something I haven’t done with a physical book in a very long time. I would strongly suggest this book to just about anyone who enjoys fantasy, it is both money and time well spent in my opinion. I’ve been eying the sequel sitting on my book shelf since I finished it, but I feel the need to ration out the story over the weeks to come, or I may regret reading it so fast.