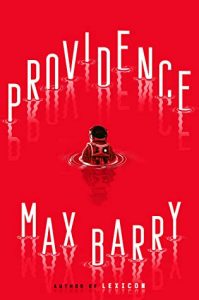 It was built to kill our enemies. But now it’s got its own plans.

In the future, the war against aliens from the dark reaches of space has taken a critical turn. Once we approached the salamanders in peace… and they annihilated us. Now mankind has developed the ultimate killing machine, the Providence class of spaceship.

With the ships’ frightening speed, frightening intelligence and frightening weaponry, it’s now the salamander’s turn to be annihilated… in their millions.

The mismatched quartet of Talia, Gilly, Jolene and Anders are the crew on one of these destroyers. But with the ship’s computers designed to outperform human decision-making in practically all areas, they are virtual prisoners of the ship’s AI. IT will take them to where the enemy are, it will dictate the strategy in any battle, it will direct the guns….

The crew’s only role is to publicize their glorious war to a skeptical Earth. Social media and video clips are THEIR weapons in an endless charm offensive. THEIR chief enemies are not the space reptiles but each other, and boredom.

But then everything changes. A message comes from base: the Providence is going into the VZ, the Violet Zone, where there are no beacons and no communications with Earth. It is the heart of the enemy empire – and now the crew are left to wonder whether this is a mission of ultimate destruction or, more sinisterly, of ultimate self-destruction…

To help celebrate the release of Max Barry’s amazing new novel Providence on March 31, Putnam has been kind enough to provide us with a finished copy to giveaway here on the Arched Doorway!

I would also highly recommend that anyone interested in this book checks out Max Barry’s other books, he is an amazing author!

Open to residents of US only, all you have to do is follow the directions below to enter for your chance to win!