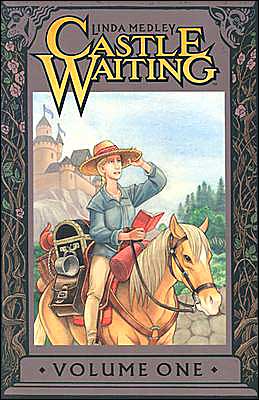 Castle Waiting is a fairy tale graphic novel that’s not about rescuing the princess, saving the kingdom, or fighting the ultimate war between Good and Evil, but about being a hero in your own home. The opening chapter tells the origin of the castle itself, which is abandoned by its princess in a comic twist on “Sleeping Beauty” when she rides off into the sunset with her Prince Charming. The castle becomes a refuge for misfits, outcasts, and others seeking sanctuary, playing host to a lively and colorful cast of characters that inhabits the subsequent stories, including a talking anthropomorphic horse, a mysteriously pregnant Lady on the run, and a bearded nun.

Welcome, readers, to TAD’s first-ever review of a graphic novel: Castle Waiting, by Linda Medley. As you can probably tell, it’s a fantasy with a diverse cast of characters that takes place in an interesting setting.

The world it takes place in is…odd. It’s definitely Earth, because mentions are made of France and Italy, even though the main cast includes anthropomorphic horses and birds, demons, and giants. That’s fine, lots of fantasy stories with odd creatures take place on Earth. It takes place around the Renaissance era, but mentions ‘The Wizard of Oz’ series, which wasn’t published until 1900. That’s a little bit different; most fantasy series that take place on earth keep the timeline consistent. These odd things, though, are minimal and have little impact on the setting. Besides the odd things, the setting is nice and the creatures and races in it are interesting, which adds to the fun of the book.

The book isn’t driven by a central plotline, but more by the characters, and their pasts and interactions. For this reason, the cast is diverse and engaging, and there’s depths to explore with each character, especially Jain, the book’s main character, whose past comes out in small flashbacks through the book and its sequel.

The first book ends by explaining the background of Sister Peace, the bearded nun mentioned in the description. This is rather long and involved, taking several chapters to relate, and gets odd when Peace pauses in relating her own past to relate the past of another character who only shows up in Sister Peace’s background. For those who want to see the main cast again, this part of the story goes by a bit slowly; it doesn’t help that more time is devoted to this than to any other character’s background (Jain is an exception, but as her past only comes up as a single chapter every so often, it’s more manageable).

The art is nice and easily relates the character’s expressions and actions. The characters are drawn distinctly from each other so that they’re easy to tell apart. The dialogue and interplay between characters is fun and natural. The lack of continuing storyline makes Castle Waiting a convenient light read, and its varied cast makes it a fun one. Pick this up if you’re a fan of graphic novels for sure.