I have a confession. 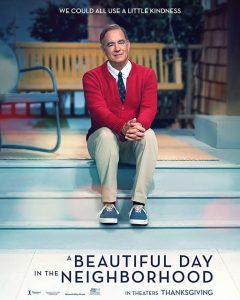 I was not a fan of Mister Rogers Neighborhood. As a kid, I enjoyed the land of Make-Believe. I especially liked the puppets. There were times when Mister Rogers would do teaching or build something, and that would fascinate me. I always preferred Sesame Street and Captain Kangaroo. When my kids began to watch television, they didn’t seem to be drawn to the Neighborhood, so I didn’t have to change my opinion.

When Fred Rogers died, there began a process that many are calling secular canonization. Mister Rogers became larger than his television persona and viewership. People began to extol the wonders of what he meant to them. The last decade has seen the popular attraction to Mister Rogers grow to a level greater than public television gave him access to.

Two movies have been released in just over a year’s time span that highlights the quality and character of Fred Rogers. The first was the biographical film Won’t You Be My Neighbor. This year sees the release of a slightly different perspective on Mister Rogers.

A Beautiful Day In the Neighborhood is a fantastical reimagining of an Esquire magazine cover feature of Fred Rogers by Tom Junod. The article becomes the central storytelling piece of the movie. The vehicle for storytelling is an episode of Mister Rogers Neighborhood. And we see all of it from the perspective of the stand-in character, Lloyd Vogel, who replaces Junod.

Since this is set up as an episode of Mister Rogers’ neighborhood, complete with rebuilt sets and its own miniature version of Philadelphia and New York City for transitions, we learn from the very beginning of the movie what the message is. We learn that Lloyd needs to learn about forgiveness and reconciliation. Someone has hurt Lloyd very badly. We get to ride along with Lloyd as he learns valuable lessons about himself, his anger, and his relationships.

This movie has been described as just what our culture as a whole needs right now. It is the elephant in the room that everyone keeps describing, but no one wants to shoo it out. We are not very nice to each other. We hurt each other with our words as we express our beliefs and opinions. Kindness and civility have been consumed to drive the anonymity of social media assassination. Like Lloyd we live from incident to incident where we can uncover the “hidden truth” about how bad something is and expose it to the light of public scrutiny. 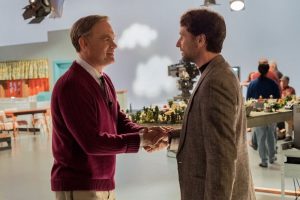 What the movie truly does is challenge us. It challenges us to be more like Mister Fred Rogers, a man who became the image we all perceive. A line from the movie that was a direct quote of Mrs. Joanne Rogers says that we shouldn’t call Mister Rogers or Fred a saint. In calling him a saint we are left with the impression that he is more than any of us could ever hope to be. He made himself into what we perceived. Every day he worked at who he was. The challenge we have to face in leaving this movie is: if we love who Mister Rogers was, then we can become like him.

I now find myself loving Mister Rogers. I didn’t want to jump onto the bandwagon of claiming that I have been a fan since I was a child. I didn’t want to say that something in his show was important to my childhood. And I really didn’t want to just grab the coattails of his canonization to say, “Hey! I like him, too.” Having seen the movie, and heard the challenge, I find myself wanting to emulate a little more of who he made himself to be. I want to find a way of bringing something of his life into my own. It isn’t that I want to be a reincarnation of him. There is no way I would ever be the quality of a person. If I can find just a little something through his life that could make me better, then I feel that he would think that was amazing.