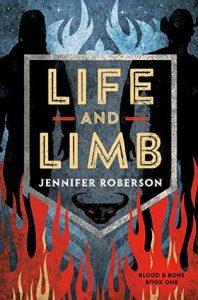 A biker and a cowboy must stop the apocalypse in the first book of the Blood and Bone modern western fantasy series.

His voice was rich, a much loved baritone, as he handed his seven-year-old grandson a gun.

“It’s time we had a talk, you and I. You won’t remember it, but you need to know it, and one day, when it’s time, I’ll call it up in you. You’ll know who you are, and what you’re intended to do. You’ll be a soldier, boy. Sealed to it. Life and limb, blood and bone. Not a soldier like others are, for it’s not the kind of war most people fight on earth. But because we’re not ‘most people,’ you and I, it will be far more important. The fate of the world will hinge upon it.”

Now no longer that wide-eyed child, Gabe is fresh out of prison, a leather-clad biker answering Grandaddy’s peremptory summons to, of all places, a cowboy bar in Northern Arizona. He is about to find out just how different he is from “most people”—and to meet the stranger with whom he will be sealed: life and limb, blood and bone, conscripted to fight an unholy war unlike any other.

For the greatest trick the devil ever pulled was convincing the world he didn’t exist.

And Gabe, thrown into the unlikely company of a country-music-loving rodeo cowboy from West Texas, an ancient Celtic goddess of war, an African Orisha who sings volcanoes awake, a Chinese goddess of mercy, Nephilim, and Grigori, finds himself fighting a battle he was bred for, but wants no part of.

I’ve been a bit burnt out on anything that resembles urban fantasy for the last year or so, so I was a bit hesitant to say yes when I was asked if I would be interested in reviewing this book. I’m always on the lookout for new books or authors to read though, so I figured it wouldn’t hurt to sit down and at least give this one a chance. Life and Limb by Jennifer Roberson was a fun read full of fast-paced action and interesting characters that kept me reading throughout most of my day off.

I’ve become pretty picky about what urban fantasy books I read or listen to these days so there are one or two things that I really look for whenever I start a new book or series like this. Most important to me is what kind of supernatural world has the author created for us and why or how has it managed to remain hidden from the normal populace for so long. I don’t want to spoil anything about this book so all I will say is that I thought Jennifer Roberson did a fantastic job creating an interesting supernatural world for us and it was easily one of my favorite things about the entire book.

The other thing I look for in a book like this is the characters, and the characters of Life and Limb are a little bit hit and miss for me. I actually loved Gabe as a character and enjoyed watching him grow and evolve as a character over the course of the book but struggled with a lot of the supernatural characters we meet. I felt like we met too many characters in too short a time for the majority of them to get enough page time throughout the book. Happily, I think the worldbuilding and story itself more than make up for the issues I had with the characters.

All in all, I thought this was a solid first book for a series and I’ll definitely be reading the sequel whenever we get it. Jennifer Roberson seems like a great author and I’ll definitely be checking out the other books and series she has written. I wouldn’t have any problem at all recommending this book to someone looking for something new and interesting to read.