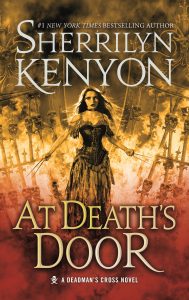 Welcome to the latest Deadmen’s Quest…

Valynda Moore was born cursed. So when she dies as the result of a spell gone wrong and is trapped in the body of a voodoo doll, she expects nothing else from her messed up life. Until Thorn, leader of the Hellchasers, offers her a chance at redemption and a new life.

But nothing has ever gone her way, for the Malachai, the very beast she and her crew of Deadmen have sworn to keep locked away, has risen. And this time he’s taken prisoners. Valynda must keep her wits about her or be denied her salvation and forced to watch as the entire world falls into the hands of absolute evil.

It’s a demon-eat-demon world where the stakes have never been higher and either redemption or the ultimate betrayal waits for her At Death’s Door.

I was pretty excited to finally get to read and review the next book in this series but At Death’s Door has proven to be one of those rare books that has left me struggling to put my feelings on it into words for a proper review. Other than her YA series, The Chronicles of Nick, I’ve never read anything of Kenyon’s outside of this trilogy, so jumping into her Dark-Hunter series like this probably wasn’t the best idea I’ve ever had. I will say tht I did enjoy At Death’s Door quite a bit and was unable to put it down once I had started reading it.

I think a large part of why I was unable to stop reading this book was because it just has so many awesome things going on at one time. I mean, who doesn’t want to read a book that follows a cursed and living voodoo doll that also features demons, pirates, and dark gods on nearly every page? I feel like every time I reached the end of a chapter anda was ready to take a break to read or do something else I was unable to stop because something or someone new and interesting was just introduced and I wanted to see just where the author went with it.

My only issue with this book is that while it was fun to read and I was unable to put it down, I still wasn’t all that invested in the characters as much I think I could have been. There are quite a few characters introduced in this book that clearly have history in this series and I just don’t know enough about them to care about them as much as I wanted to or as much as the author probably intended me to. Happily, I don’t think that takes away from the story as much as I could have and I still enjoyed reading this book much more than I honestly expected to.

I also want to say that I both agree and disagree with the people who I’ve seen saying you can jump into this series at any point and not really be lost or confused. While I was able to enjoy these three books despite the fact that I haven’t read anything else in the Dark-Hunter series, I think I would have enjoyed them a lot more and caught more of the details and connections if had read at least a few of the other books first.

All in all though, I would say this was an enjoyable read that was well worth the sleep I sometimes lost while reading it and I wouldn’t hesitate to add it to my list of recommended books and series.