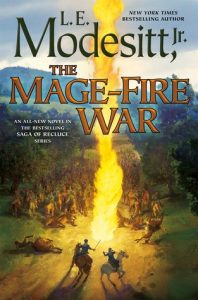 Once again, prejudices against the use of chaos magic force Beltur and his companions to flee their refuge in Axalt. The rulers of nearby Montgren have offered them sanctuary and the opportunity to become the Councilors of the run-down and disintegrating town of Haven.

Montegren lacks any mages—white or black—making this seem like the perfect opportunity to start again.

However, Beltur and the others must reinstitute law and order, rebuilt parts of the town, deal with brigands—and thwart an invading army.

I’ve been a pretty big L.E. Modesitt Jr fan ever since I stumbled across his books nearly 15 years ago now and I’m usually pretty up to date on his new releases so I was pretty surprised to receive a review copy of this book in the mail a few weeks ago. Part of my surprise is that the Recluce books have pretty much always been duologies or standalone books so I didn’t expect to see a third book featuring Beltur any time soon. The Mage-Fire War by L.E. Modesitt was everything I expected from a Recluce book — it was a fast-paced story full of action, adventure and political intrigue that kept me on the edge of my seat the entire time I was reading it.

I don’t think I’ve disliked a single one of Modesitt’s Recluce books but I was still a bit surprised by how much I enjoyed reading The Mage-Fire War and how quickly it has become one of my favorite books in the series. I think the Recluce books can be a bit repetitive at times and I was worried that since this was the third book in this set that it would be even worse than usual but I actually thought it stood apart from the rest of the series in that regard. Instead of focusing solely on either Order or Chaos we get to see both types of mages in this book and see how well they can work together for the greater good of their community. I think it helps that this book takes place so long before the founding of Recluce so we get to see Order and Chaos through the eyes of people who don’t see things quite as black and white as people in the later books seem to.

One of my favorite things about The Mage-Fire War is how the story revolves around the concept of hope. Beltur and his friends hope that they have finally found a place to call home where they won’t be persecuted and chased out. There is the hope that they can make their new home safe enough that other mages and people will think it’s a good place to come call home as well. This book also helped clear up some of the confusion I had in the previous two books on where this takes place in the worlds timeline. Thereare a few scenes in The Mage-Fire War that help pinpoint exactly when and where the story takes place and that hint at just what the city they are trying to protect becomes.

I think the one thing I’ve always enjoyed most about the Recluce books is how much they focusing on woodcrafting or smithing of some sort so I was a little bit disappointed that this aspect of the series didn’t really appear all that much in this book. Don’t get me wrong, I understand why, since when you’re at war you probably won’t have the time to worry about making something when you’re trying to save lives, but it was still fairly disappointing to me.

All in all though, I thought The Mage-Fire War was a great book and I wouldn’t hesitate to recommend it to anyone looking for a fun new book to read,  though I would definitely suggest people read the previous two books first so there is no confusion. I’m also pretty excited to discover that there is going to be a follow up book to this trilogy of books set a decade or so after the events of The Mage-Fire War and follow a new protagonist. I’m really looking forward to seeing what becomes of everyone who survives this book!