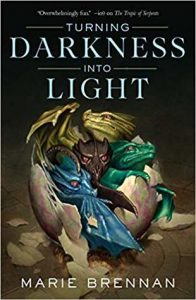 As the renowned granddaughter of Isabella Camherst (Lady Trent, of the riveting and daring Draconic adventure memoirs) Audrey Camherst has always known she, too, would want to make her scholarly mark upon a chosen field of study.

When Lord Gleinheigh recruits Audrey to decipher a series of ancient tablets holding the secrets of the ancient Draconean civilization, she has no idea that her research will plunge her into an intricate conspiracy, one meant to incite rebellion and invoke war. Alongside dearest childhood friend and fellow archeologist Kudshayn, must find proof of the conspiracy before it’s too late.

I’ve been a fan of Marie Brennan’s ever since I stumbled across a Natural History of Dragons on Audible a few years ago. I think her Memoirs of Lady Trent series offers a really interesting and refreshing take on dragons in fantasy. So I was really excited to see that the series was getting a follow-up book and couldn’t wait for it to release. I thought Turning Darkness Into Light was a fun read and a great addition to this fantastic world that Marie Brennan has created for us.

While I was excited to read another of Marie Brennan’s amazing books, I was a little bit hesitant to start reading Turning Darkness Into Light after I realized it wasn’t a direct continuation of the Memoirs of Lady Trent. Though it didn’t really take me long to decide that jumping forward in time and following a new protagonist was probably the best thing Marie Brennan could have done with this book. I found Audrey Camherst to be a fantastic character and I really enjoyed following the adventure of an archeologist who specialized in Draconian artifacts instead of a dragon scholar this time around. Audrey’s love and passion for her career made her a really fun character to read about.

I think one of the best things about this book is that while it is clearly tied to the Memoirs of Lady Trent, you don’t need to read that series to really enjoy it. Turning Darkness Into Light stands very well on its own and is a great introduction to the series for new readers. I do have to be honest and say though that I thought the beginning of the book was a bit too slow and I struggled to get through the first few chapters. Happily, it quickly picked up after that and became one of those stories that I was just unable to put down once I had started it.

Turning Darkness Into Light was a fun book to read and I wouldn’t hesitate to recommend it to anyone looking for something new to read. You don’t even need to read the Memoirs of Lady Trent first to understand any of the events that go down in this book. Though I would still recommend that everyone who hasn’t should still read it as Marie Brennan is just that good of an author. I do hope this becomes its own series and that we get to see more of Audrey Camhersts adventures.