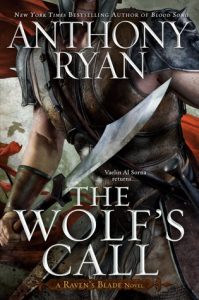 Vaelin Al Sorna is a living legend, his name known across the Realm. It was his leadership that overthrew empires, his blade that won hard-fought battles – and his sacrifice that defeated an evil more terrifying than anything the world had ever seen. Yet he cast aside his earned glory for a quiet life in the Realm’s northern reaches.

Now whispers have come from across the sea of an army called the Steel Horde, led by a man who believes himself a god. Vaelin has no wish to fight another war, but when he learns that Sherin, the woman he lost long ago, has fallen into the Horde’s grasp, he resolves to confront this powerful new threat.

To this end, Vaelin travels to the realms of the Merchant Kings, a land ruled by honour and intrigue. There, as the drums of war thunder across kingdoms riven by conflict, Vaelin learns a terrible truth: that there are some battles that even he cannot hope to win

I honestly had no idea another Vaelin Al Sorna book was even in the works until I received my review copy of this book in the mail a few books ago. I have to admit I was more than a little hesitant to actually start reading this book since Queen of Fire really let me down and kind of left a bad taste in my mouth for the longest time. I’m always willing to give authors a second chance though and I’m honestly glad I did with this book. While not quite amazing as Bloodsong was, The Wolf’s Call was a fun read full of action and intrigue that kept me reading all night long.

I think one of the things that really helped this book be as enjoyable as it was is that it takes place so long after the events of Queen of Fire and actually answered a lot of the questions I was left with at the end of the first trilogy. Vaelin Al Sorna is as awesome a character as he ever was and it was really fun to find out what happened to him after the events of the last book and to see that he is still as badass as he has ever been.

I was a bit worried that this book was just going to rehash previous events or just revisit places from the original trilogy so I was glad to see we get a cool new villain to threaten the world and that we get to see Vaelin visit a country we haven’t seen or heard about yet. One of the things I think Anthony Ryan has always done a good job of is taking some fairly common fantasy tropes and twisting them into something new and refreshing. All of his book, even the ones I’m not a huge fan of, always seem so different from other books in the genre. It’s always a nice thing to see.

After finishing The Wolf’s Call I will have to say that I’m hesitantly hopeful for the next book in this series but nervous about being let down the same way I was with the final two books in the previous trilogy. I would definitely recommend this book to any fans of Anthony Ryan who are hesitant to start reading it the way I was and to new reading looking to jump into the world of Vaelin Al Sorna. It may be the fourth book set in this series, but The Wolf’s Call does a pretty decent job of standing on its own.