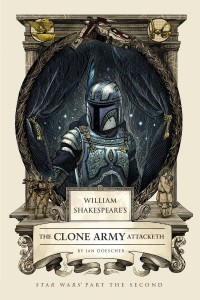 To Shmi or not to Shmi?

The curtain rises on yeoman Jedi Anakin skywalker, a man torn between duty to his Masters, attraction to Padmé, and concern for his beloved mother, Shmi. His choices will determine not just his own destiny, but that of the entire Republic.

A noble lady in danger. A knight and squire in battle. And a forbidden love written in the stars. The quill of William Shakespeare meets the galaxy of George Lucas…complete with period illustrations, insightful soliloquies, and masterful meter that will convince you the Bard himself penned this epic adventure.

Once again we return to the world of William Shakespeare’s Star Wars, where people in doublets trade vicious insults while flying in ships and battling with lightsabers. It’s just as enormously fun as all the others.

I will fully admit that, while I do consider it a step down from the original trilogy, I didn’t uniformly hate the prequel trilogy – I enjoyed The Phantom Menace and though it has its problems, I still have some fun watching it. The same can’t be said for Attack of the Clones and Revenge of the Sith, which were plagued by an under-developed romance, inconsistent logic, and a wooden performance by Hayden Christensen as Anakin. I’ve only seen them once each and mostly refresh my memories of them through pop culture complaints about their quality. Luckily for me, then, that The Clone Army Attacketh came around and made the second movie fun in its own way.

The book did its best to fix what went wrong in the movie, mainly the romance between Padmé and Anakin. While in the movie they had only a few scenes scattered amidst more interesting ones, their scenes get merged into one, with lots of added soliloquies that help show Padmé’s growing feelings for him. While it was nice that it got developed a bit more, it still felt intrusive, like if someone stopped Macbeth in the middle of Act 3 to show the balcony scene from Romeo and Juliet, and I was happy when the story got back to more interesting things. The romance was still underdeveloped, and while Anakin’s wish to marry Padmé can at least be dismissed as youthful impulsiveness, I still don’t see why Padmé would go along with it. I don’t think it’s very fair to blame to book for this, as they were in the source material, but it does pull the quality of the book down slightly, though at least you know that once the romance scene is over, you don’t have to deal with it again. I will make this point in its favour, and it’s one I never thought I’d concede: It makes the “I hate sand” line sound far less stupid.

As in the others, there were a lot of shout-outs to other plays; the one scene with Anakin and Padmé’s romance references most of Shakespeare’s comedies as well as Romeo and Juliet, and the play itself includes many references to Macbeth and, oddly enough, one reference to The Wizard of Oz. The character Rumour, who exists to spread discord, makes several appearances, and like The Phantom of Menace the book flirts with self-referentiality and continues Jar Jar’s character arc.

And if you need any other reason to read it, remember: This is the one where we have Samuel L. Jackson, wielding a lightsaber, speaking Shakespearean English.