As you know Occasionally, I get a little obsessed with creatures.

Once upon a time it was cephalopods.

Ok, truly, I’m still obsessed with cephalopods. Cephalopods are amazing. They’re also the starter DNA for the skymouths in Updraft. (Very starter — I kind of weaponized a squid, then turned it invisible and omnivorous and gave it the power of flight…. You know, normal stuff. What-could-possibly-go-wrong territory… but I digress…)

Now I’m also a bit obsessed with another creature. This is a high-altitude vulture found mostly in Asia and Ethiopia that has come back from the brink of extinction. A vulture whose ancestors reportedly killed an ancient Greek playwright with a turtle. A creature that has fought its way back from extinction, but recently was moved to near-threatened status again. 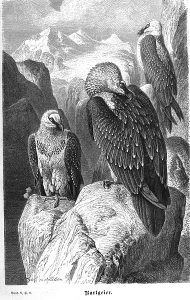 This creature’s wingspan can extend to 9’ and it can grow as tall as 4’. It can live into its 40s. It glides the vents so beautifully for its size. Check out some video (with naturalist narration) here: http://www.bbc.co.uk/nature/life/Bearded_Vulture#p00fc69l

And it survives primarily by dropping its prey from great heights in order to get at the bone marrow inside.

Friends, I am talking about the baddest of badass vultures, the lammergeier.

Otherwise known as bearded vultures, and referred to as Ossifrage in ancient times (which means, quite literally, bone-breaker), lammergeiers are just … 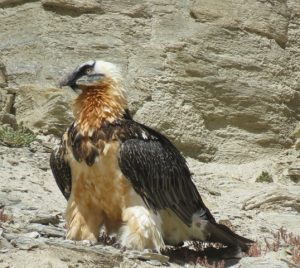 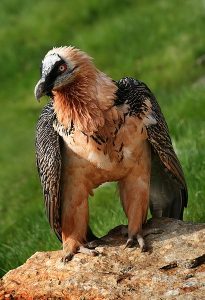 Seriously if you’re not convinced that I am correct in my obsession with the lammergeiers, let me tell you some more things:

They use dirt as a status accent. Seriously, they glam. Lammergeiers rub dirt into their feathers to make themselves even more badass — with special favor given to orange dirt.

“It is theorized that the orange hue is a status symbol. More soiled feathers indicates that the lammergeier had the time and resources to find an adequate place to bathe; the brightest-colored vultures should have the most territory and knowledge of their surroundings.” (Mental Floss)

They exist mostly on marrow and bone, and to get to the marrow, they fly their meal up to a great height and DROP it to crack it open.

They are legendary murderers: You know that story about the Greek poet Aeschylus (psst he said: “Wisdom comes alone through suffering.”) who died around 400 BC because a turtle fell on his head? YUP that was them. Then they managed to blame it on the eagles.

Giant birds that paint themselves to look scarier and use the ground like a walnut-cracking tool? OH YES PLEASE.

Why am I talking about what is basically the Mad Max of all birds? Because when it came to finding the perfect monster for my latest book CLOUDBOUND, the lammergeier was a perfect starting point.

In a city of living bone, what’s a little natural-born bone-eating badassery between friends? What could possibly go wrong?

If your answer is “everything” you’re right. Come meet a literary evolution of the lammergeier – the bone eater, over in Cloudbound, out 9/27 from To 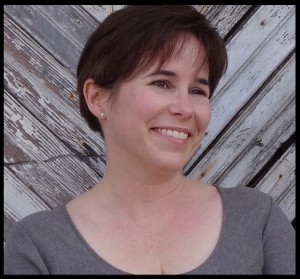 Fran Wilde is the author of the Andre Norton-, and Compton Crook Award-winning and Nebula-nominated novel Updraft (Tor 2015), its sequel,Cloudbound, publishing from Tor in September 2016, and the novella The Jewel and Her Lapidary (Tor.com Publishing). Her short stories appear in Asimov’s, Tor.com, Beneath Ceaseless Skies, and Nature. She writes for publications including The Washington Post, Tor.com, Clarkesworld, iO9.com, and GeekMom.com. You can find her on twitter @fran_wilde, Facebook @franwildewrites and at franwilde.net.