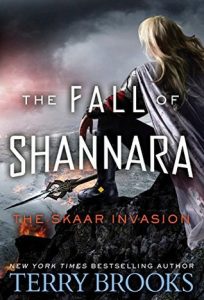 Following The Black Elfstone, the second book of the epic four-part conclusion to the Shannara series from one of the acknowledged masters of the fantasy genre.

Tensions in the Four Lands are high. The mysterious force that laid waste to Paranor has revealed a more human face. While some gain a new understanding of the invaders and what they are after, others continue their existing quests even as the peril rises. For what looked to be a formidable invading force proves only the forerunner of a much vaster army–one that is now marching against the Four Lands in all its fury.

While I’m a huge Terry Brooks fan and have been reading his Shannara series for nearly 20 years now, I was honestly a bit hesitant to start reading this book despite pre-ordering it months before it released. I was pretty disappointed in the last trilogy of Shannara books to release and after loving The Black Elfstone so much I was a little bit worried that this book wouldn’t hold up in comparison. Happily, that was not the case and once I started reading it I was unable to put it down. The Skaar Invasion (The Fall of Shannara #2) by Terry Brooks was a fast-paced and exciting read that kept me up reading late into the night in my need to know what was going to happen next.

As much as I loved The Black Elfstone when it released last year I think I would now have to say that The Skaar Invasion is probably the best Shannara book that I’ve read in a long time. It feels like Terry Brooks went through all the previous books in the series and pulled out almost everything that made them each so good and combined them into one fantastic story. I loved just about everything in this book and think it has some of the best characters in the series so far. I actually enjoyed it so much that I went online and bought the audiobook the same day that I finished reading it so that I could enjoy the story in a more leisurely manner.

I really don’t want to spoil things for people so I can’t go into much detail on exactly why I loved this book so much, but I there is so much happening in The Skaar Invasion that I think is going to change the Four Lands in some pretty interesting ways. I think you can definitely tell that the Shannara series is heading towards an epic conclusion and I can only hope that the last two books in The Fall of Shannara are as good as the first two. I think these books are a return to everything that makes the Shannara series so fun to read.

The only problem I had with this book is that I thought it felt a bit bloated at times with just how much information we get so fast. There were a few too many viewpoint characters for my liking and I can’t help but feel like it bogged the story down a time or two. Happily, though I felt like this only happened a few times and for the most part, I thought The Skaar Invasion ended way too fast because I just couldn’t get enough.

All in all, I think The Skaar Invasion was a fantastic book and the Fall of Shannara is shaping up to be an amazing conclusion to the series. I can’t wait to see what happens in the next book when it releases next year!