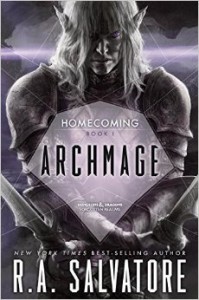 The pall that had descended over the North is gone, and a new day has dawned on a victorious Mithral Hall, but no matter how bright things seem on the surface, Drizzt and his companions know that what lurks just under their feet remains steeped in evil and charged with unimaginable power.

The dark elves of Menzoberranzan, including the powerful Archmage Gromph, aren’t done with Drizzt yet. And consumed by their own power struggles, feeling backed into a corner, the drow may just be desperate enough to call on demonic forces from the deepest reaches of the Abyss, and unleash a disaster even the Underdark could never have prepared for.

Every year I find myself looking forward to the newest Drizzt book by R.A. Salvatore, and every year I finally get to read the book and I always find myself wondering why I was so excited. After the events that transpired in the Companions Codex I had high hopes that Salvatore would surprise me with his next series. Sadly going by how I felt after reading Archmage that is not going to be the case. I really need to stop getting my hopes so high for these books and maybe I will enjoy them more.

The war of the Silver Marches is over, the Orcs and Drow have been defeated, and the slow process of rebuilding has begun. Now that they are no longer needed defending the people of the Silver Marches the dwarf kings have decided that it is now time to retake the ancient dwarven city of Gauntlgrym . There is one problem however, it has been turned into the Drow city Q’Xorlarrin and they have no plans to let it go easily.

My main problem with the Drizzt books these days is that nothing ever seems to change. The Companions of the Hall have returned from the dead and they have a new chance at life, but do they make any drastic changes? No, they make the same choices and mistakes they have made before, do the exact same things they did in the early books. Drizzt, Bruenor and Cattie-brie fight some Drow and try to retake a long lost dwarven city. Regis and Wulgar have left the group to go do their own thing and left the rest of the Companions to once again fend for themselves. Salvatore can be such a good writer that it makes me a bit sad it feels like I’m reading a story I have read multiple times already.

Every new book in the series seems different on the surface, but when you really get into the story it is just a retelling of things that happened in the early books of the series. I pick up every book hoping to be shocked and amazed by the story and am disappointed every time. Yet I still pick up every new book in the series. Salvatore and WotC are obviously doing something right, even if I can’t find what it is.

I received a free copy of this book in return for an honest exchange.