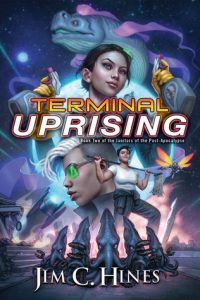 Between trying to protect their secrets and fighting the xenocidal Prodryans, who’ve been escalating their war against everyone who isn’t Prodryan, the Krakau have their tentacles full.

Mops’ mission changes when she learns of a secret Krakau laboratory on Earth. A small group under command of Fleet Admiral Belle-Bonne Sage is working to create a new weapon, one that could bring victory over the Prodryans … or drown the galaxy in chaos.

To discover the truth, Mops and her rogue cleaning crew will have to do the one thing she fears most: return to Earth, a world overrun by feral apes, wild dogs, savage humans, and worse. (After all, the planet hasn’t been cleaned in a century and a half!) What Mops finds in the filthy ruins of humanity could change everything, assuming she survives long enough to share it.

Perhaps humanity isn’t as dead as the galaxy thought.

I’ve been a fan of Jim C. Hines ever since I first stumbled across his Magic Ex Libris series a few years ago and have yet to dislike a single book of his that I’ve read. So I was pretty excited to receive a copy of this book a few weeks ago. I actually made it around a quarter of the way through the story before I realized this was the second book in a series but by that point, I couldn’t stop reading.  Terminal Uprising was a fun and action-packed read that had me laughing the entire way through despite not really understanding what was going on early int he book.

I think the thing I love most about this author is the way he takes some of the most ridiculous plot ideas and turns them into books that are all but impossible to put down. I don’t know of anyone other authors except maybe Brandon Sanderson who could take something as mundane as a group of janitors and turn them into galaxy traveling heroes and have the concept work so well.

The other thing that I think Jim C. Hines did really well in Terminal Uprising (And the previous book I’m assuming) was create surprisingly realistic characters for such a ridiculous story and setting.  I loved reading about Marion “Mops” Adamopoulos and her entire crew and thought the way the whole book was filtered through the dirt and grime seeking gaze of a bunch of janitors was just fantastic. I think it really says something about this book and it’s characters that I enjoyed them so much despite skipping the first book entirely.

All in all, I thought Terminal Uprising was a fantastic read and I can’t wait to see what happens next in the series. I’ve already started listening to the audiobook of Terminal Alliance so that I can catch up on the events that lead up to this story. I only wish this book was available as an audiobook as well so that I can experience it again in a new medium.