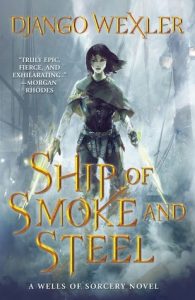 In the lower wards of Kahnzoka, the great port city of the Blessed Empire, eighteen-year-old ward boss Isoka comes to collect when there’s money owing. When her ability to access the Well of Combat is discovered by the Empire—an ability she should have declared and placed at His Imperial Majesty’s service—she’s sent on an impossible mission: steal Soliton, a legendary ghost ship—a ship from which no one has ever returned. If she fails, her sister’s life is forfeit.

As a fan of Django Wexler, I have to say that I’m a bit disappointed in myself for having no idea that this book was even coming out until I stumbled across it while looking for something to read a few days ago. Honestly, all I saw at first was the awesome cover and I didn’t even notice who the author was until I had already decided to buy it. Ship Of Smoke And Steel by Django Wexler was a fun read full of intense and fast-paced action that I was unable to put down once I had picked it up. I made the mistake of thinking I would read a chapter or two before going to bed to get a feel for the story and ended up reading until just a couple hours before I had to be awake for work the next day.

While I thought this was a well-written book that had a lot of things going for it, I think the one thing that really made it stand out to me was its magic system. I’m a sucker for a bit of interesting magic and I thought the magic system in this book was great in both concept and execution. It was pretty interesting and detailed yet I didn’t have any problems at all in understanding how what was actually explained worked. I also thought the author did a great job weaving the magic throughout the plot in such a way that it didn’t bog down the story at all.

I also thought the world created for Ship Of Smoke and Steel was both detailed and interesting and I can’t wait till we get to see more of it in future books. I thought there were some interesting bits of information and lore that we got to see and I’m looking learning more and seeing how everything plays out in the future.

The only issue I really had with this book was how unlikable I found Isoka to be as a character for the majority of the story. All of the other characters, whether good or bad, had at least a few redeeming qualities that I felt she lacked. Though I do think this was done to her character on purpose and the store itself makes up for a lot of the issues that I had with her. I do think she has great potential though and can only hope that she gets better in the next book. I also saw this book being marketed as YA on Amazon and I found it to be a bit more graphic and crude than I expected, though that isn’t necessarily a bad thing.

All in all I thought this was a great book and I won’t hesitate to recommend it to anyone looking for something new to read.