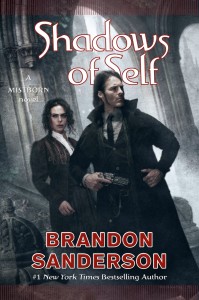 Shadows of Self shows Mistborn’s society evolving as technology and magic mix, the economy grows, democracy contends with corruption, and religion becomes a growing cultural force, with four faiths competing for converts.

This bustling, optimistic, but still shaky society now faces its first instance of terrorism, crimes intended to stir up labor strife and religious conflict. Wax and Wayne, assisted by the lovely, brilliant Marasi, must unravel the conspiracy before civil strife stops Scadrial’s progress in its tracks.

Shadows of Self will give fans of The Alloy of Law everything they’ve been hoping for and, this being a Brandon Sanderson book, more, much more.

I wasn’t all too excited for the release of this book, I didn’t really enjoy The Allow of Law, I found Wax to be a bit boring in it, with Wayne only being there to provide a bit of comic relief to offset Wax’s character. I thought the two female characters were nothing but cardboard placeholders meant to look pretty and to provide a reason for Wax and Wayne to run around causing mayhem.

So I was a bit surprised that I loved Shadows of Self so much, it turned out to be a fun and fast paced story that I was unable to put down once I had started reading it.  Brandon managed to take the characters I disliked or hated and managed to flip it around and make me fall in love with them.  Wax went from boring me as he did in the previous book, to being the gentleman bounty hunter he was said to be in Alloy. While Wayne was given a bit of a back story to flesh out his character and give his attitude and character a bit of context.

Sternis and Marasi go from being the flimsy stand-ins that they were to a pair of full flesh out characters with motives all of their own, who prove to be capable partners to the bounty hunting duo.

I would have to say that my favorite part of Shadows of Self isn’t the characters or the plot like it usually is with a Sanderson book, but the world that he has built around them. I don’t know many authors who could take an industrial era, place it in a western setting and pepper it with elements of steampunk and fantasy — all without turning it into a massive ball of confusion. That seems like an impossible feat all on its own, but when you add in the bits and pieces of the original Mistborn trilogy that have begun cropping up, you really start wondering how he does it.

While I may not have enjoyed Wax and Wayne’s story in the beginning, I now can’t wait until the release of the next book. At least it’s only a few months before I will hold it in my hands.