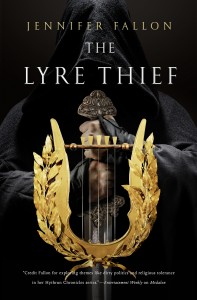 Her Serene Highness, Rakaia, Princess of Fardohnya, is off to Hythria, where her eldest sister is now the High Princess, to find herself a husband, and escape the inevitable bloodbath in the harem when her brother takes the throne.

Rakaia is not interested in marrying anyone, least of all some brute of a Hythrun Warlord she’s never met, but she has a plan to save herself from that, too. If she can just convince her baseborn sister, Charisee, to play along, she might actually get away with it.

But there is trouble brewing across the continent. High Prince of Hythria, Damin Wolfblade, must head north to save the peace negotiated a decade ago between the Harshini, Hythria, Fardohnya, Medalon and Karien. He must leave behind an even more dangerous conflict brewing between his wife and his powerful mother, Princess Marla.

…And in far off Medalon, someone has stolen the music.

Their quest for the tiny stolen lyre containing the essence of the God of Music will eventually touch all their lives, threaten everything they hold dear and prove to be far more personal than any of them can imagine.

Before receiving my copy of The Lyre Thief (War of Gods #1) in the mail I had never heard of Jennifer Fallon, or read any of her books before. After doing a little research and seeing just how many books she has had published over the years, and how popular those books seem to be, I’m not sure how I managed to avoid her for so long. I’m usually the one to laugh when someone asks me if I’ve read such an author before when I am looking for something to read.

The Lyre Thief is an amazingly well written and fast-paced story that I was unable to put down once I started reading it. It’s been awhile since I’ve enjoyed a newly discovered book or author quite so much. I liked it enough that I’ve already started a reread even though it hasn’t even been two full days since I finished it the first time. I may even be enjoying my reread more than I did the initial read.

Normally I may find it difficult at times to say exactly why I enjoy a book, The Lyre Thief has so far proven easy to talk to people about. I found it to be one of the most interesting and well-written stories that I have read in a long time. Despite the fact that I haven’t read the two trilogies that come before this one, I was able to follow the story just fine. While I’m sure it might make it a bit easier to follow the story if you read the other books first, I don’t think it’s necessary. Jennifer Fallon does a great job of telling a complex and engrossing story while still giving enough backstory from the previous books in the series, all without losing pace or bogging down the plot at all.

I was a little bit surprised and just a little bit leery of how many viewpoint characters were introduced early on in the book, but each had their own interesting story lines to follow and the author somehow manages to weave them together to form one cohesive story. I wasn’t sure how she was going to connect all the different plots and characters but Jennifer Fallon did a great job doing so.

I can’t say enough how glad I was to have this book waiting in the mail when I got home from work, not only was I unable to stop reading it, but it introduced me to a new author with plenty of books I haven’t read. I know what I’m going to be spending a lot of my free time doing in the near future. I wasn’t even half way through The Lyre Thief before I got on my computer and ordered the first trilogy in the Hythrun Chronicles. I want to catch up before the next book in the series is announced or released. I would recommend this series to just about anyone who loves fantasy. If you haven’t read anything by Jennifer Fallon this seems like the perfect book to jump into one of her series with.