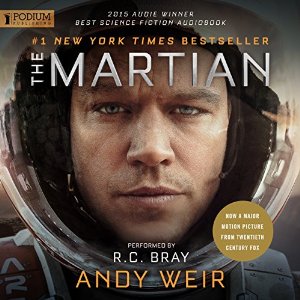 Six days ago, astronaut Mark Watney became one of the first people to walk on Mars. Now, he’s sure he’ll be the first person to die there. After a dust storm nearly kills him and forces his crew to evacuate while thinking him dead, Mark finds himself stranded and completely alone with no way to even signal Earth that he’s alive – and even if he could get word out, his supplies would be gone long before a rescue could arrive. Chances are, though, he won’t have time to starve to death. The damaged machinery, unforgiving environment, or plain old “human error” are much more likely to kill him first.

The Martian by Andy Weir is probably the best science fiction books I have ever had the pleasure of reading, and my initial review of it can be found here. Once I finished reading it the first time, I knew I would have to buy the audiobook to listen to it fairly soon. To me, The Martian read like something that was almost made to be listened to in the audiobook format. Now, I can’t say what anyone else will think of it but listened to it twice in a row.

R.C. Bray may have ruined every other audio book out there for me, it seems perfectly fitting that such a good book, got such an amazing narrator — his performance completely blew me away. For the first time in a long time, I didn’t feel the need to set the book to 3x speed as I usually do, I find it makes the audio a little bit more enjoyable. if I could have slowed the book down to make it longer, and not affected Bray’s superb performance I believe I would have. He gave every character in the book a distinctive voice and perfected every accent he used. Something I don’t think most narrators are able to do very well.

This was the first audiobook that I have listened to, that made the book come alive for me the same way it does when I read it myself. There were times Bray made me feel like I was either trapped on mars with Watney or sitting alongside the men and women of NASA trying to figure out how to bring him home alive. I don’t know that I have ever felt so immersed in a book as I have with this one, and I credit that in equal parts to the author and narrator.

It has been a few weeks since I finished listening to The Martian for the second time, and I already feel like listening to it once again. I’ve never listened to any other audiobook more than once.