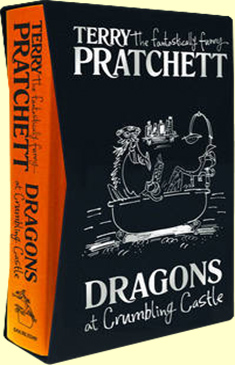 A deluxe, slipcase edition of Dragons at Crumbling Castle, complete with critical commentary, bonus stories and a beautiful limited-edition print.

Focus on a planet revolving in space… Focus in on a small country in the northern hemisphere — Great Britain.
Closer, closer… and on the western edge of London you can see the county of Buckinghamshire. Small villages and winding country roads. And if you could go back in time to the mid nineteen-sixties, you might spot a young lad on a motorbike coming down one such lane, notebook and pen in his jacket pocket.
This is me. A junior reporter for the Bucks Free Press, where I began writing stories for young readers that were published every week in the newspaper. The stories in this collection are a selection of those. There are wizards and mayors, carpet people and a monster in a lake, along with plenty of pointy hats. And some of these stories even spawned my later novels.

14 hilarious short stories by Terry Pratchett, perfect for anyone aged 8-108. Terry’s youngest writing yet — this collection will introduce a whole new generation of fans to the witty and wonderful world of Pratchett.

Dragons at Crumbling Castle is a collection of short stories by Sir Terry Pratchett, intended for young children but great for any fans of his works. With sixteen stories, commentaries on each one by Suzanne Bridson, a rather lovely box, and an exclusive piece of art by the illustrator, the collector’s edition is a lovely addition to any bookcase.

The stories included were written when Pratchett was seventeen, and were written for the local paper in a section for children. They’ve been edited slightly since Pratchett was a kid, but are for the most part left intact, giving an interesting view of how he wrote in his early days. Certain elements – a general level of silliness, unusual characters, turtles – show up later in his Discworld series, and one of the stories became the basis for his first published novel, The Carpet People. Though different from what fans of Pratchett’s later works are expecting, the stories are quite well-written and very enjoyable. The stories are interspersed with illustrations by Mark Beech, adding colour and flavour to the already-rich text. The commentaries don’t add much to the stories, and are mostly just thoughts on what happens in the stories; to be perfectly honest, I would have much preferred if they were by Pratchett himself, to get his view on his early work (as much as he doesn’t like it). The occasional interesting tidbit can be found in them, however, and overall they’re not bad reading.

Though technically meant for kids, no one is too old for Dragons at Crumbling Castle. The whimsical stories bring you back to your childhood, and the amount of world-building and character Pratchett fits into such short stories is truly a testament to his skill as a writer. Whether a long-time fan of Terry Pratchett or just discovering his work, Dragons at Crumbling Castle will find a place on every bookshelf.