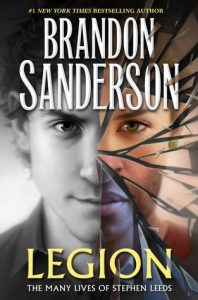 Stephen Leeds is perfectly sane. It’s his hallucinations who are mad.

A genius of unrivaled aptitude, Stephen can learn any new skill, vocation, or art in a matter of hours. However, to contain all of this, his mind creates hallucinatory people—Stephen calls them aspects—to hold and manifest the information. Wherever he goes, he is joined by a team of imaginary experts to give advice, interpretation, and explanation. He uses them to solve problems… for a price.

Stephen’s brain is getting a little crowded and the aspects have a tendency of taking on lives of their own. When a company hires him to recover stolen property—a camera that can allegedly take pictures of the past—Stephen finds himself in an adventure crossing oceans and fighting terrorists. What he discovers may upend the foundation of three major world religions—and, perhaps, give him a vital clue into the true nature of his aspects.

This fall, Tor Books will publish Brandon Sanderson’s Legion: The Many Lives of Stephen Leeds. The collection will include the science fiction novellas Legion and Legion: Skin Deep, published together for the first time, as well as a brand new Stephen Leeds novella, Lies of the Beholder. This never-been-published novella will complete the series.

I’ve been a fan of Brandon Sanderson’s ever since I stumbled across a copy of Elantris when looking for something to read at the library nearly10 years ago and I don’t think he’s written a story that I’ve really disliked yet. So I was pretty excited to receive my copy of Legion: The Many Lives of Stephen Leeds a few weeks ago as I had been kind of holding off on reading all of the Legion novellas until the last one was finished because I figured they would be released in a single volume once they were done. While I think it was worth the wait I also have to be honest and say that my feelings on this book are a bit mixed.

I loved the whole concept behind these novellas and I really enjoyed Stephen Leeds as a character and love the way his strange ability works and manifests itself. From any other author, I think this would have been enough to make the book amazing but I’ve come to expect a certain level of worldbuilding from Brandon Sanderson that I just don’t think is present in these novellas.  I think Brandon Sanderson is at his best when writing epic fantasy and I can’t help but feel like this book would have been better if it had been one continuous story instead of three separate but interlocking novellas.

To me, the three novellas in this book had a really episodic feel to them and my first thought upon finishing this book wasn’t how good it was but how much more amazing it would have been as something like a TV series or graphic novel. If any book or series feels like it was written to be adapted into a television series or something similar its the Legion novellas. I’ll have to look it up later but I would be absolutely shocked to find out the rights to this series hasn’t already been optioned by someone.

All that being said I still thought these were three well-written novellas and I had a lot of fun reading them. I will have no problem recommending this book or any of the individual novellas to anyone looking for something new to read.