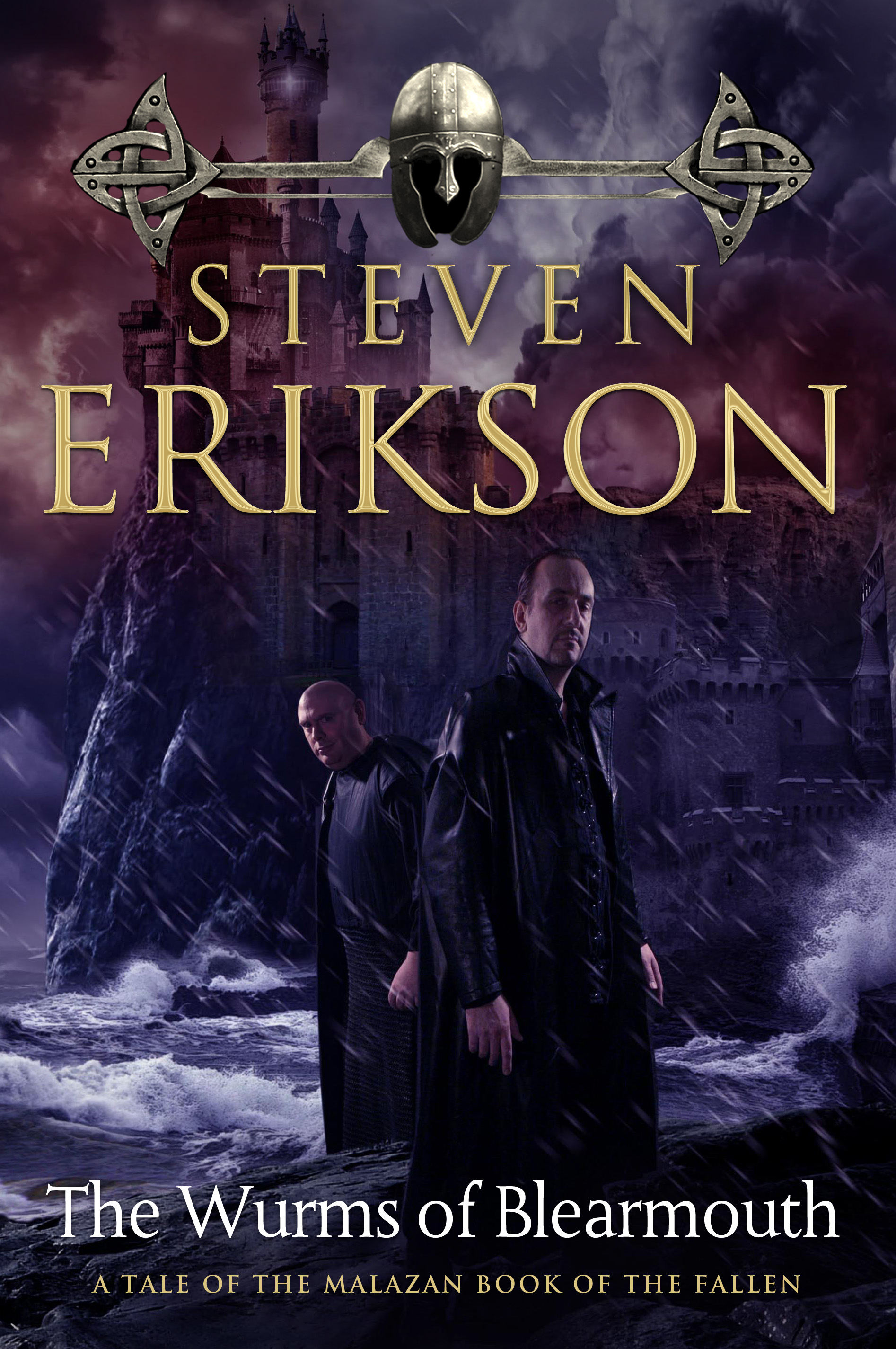 Tyranny comes in many guises, and tyrants thrive in palaces and one-room hovels, in back alleys and playgrounds. Tyrants abound on the verges of civilization, where disorder frays the rule of civil conduct and propriety surrenders to brutal imposition. Millions are made to kneel and yet more millions die horrible deaths in a welter of suffering and misery.

But leave all that behind and plunge into escapist fantasy of the most irrelevant kind, and in the ragged wake of the tale told in Lees of Laughter’s End, those most civil adventurers, Bauchelain and Korbal Broach, along with their suitably phlegmatic manservant, Emancipor Reese, make gentle landing upon a peaceful beach, beneath a quaint village at the foot of a majestic castle. There they make acquaintance with the soft-hearted and generous folk of Spendrugle, which lies at the mouth of the Blear River and falls under the benign rule of the Lord of Wurms in his lovely keep.

Make welcome, then, to Spendrugle’s memorable residents, including the man who should have stayed dead, the woman whose prayers should never have been answered, the tax collector everyone ignores, the ex-husband town militiaman who never married, the beachcomber who lives in his own beard, the now singular lizard cat who used to be plural, and the girl who likes to pee in your lap. And of course, hovering over all, the denizen of the castle keep, Lord—Ah, but there lies this tale.

As a friend pointed out, the title of this short novella by Steven Erikson sounds like the name of a disease. But Spendrugle from Blearmouth is in fact a backwater town in West Elingarth and this is where Bauchelain and Korbal Broach along with our favorite man-servant Emanicipator Reese (Many the Luckless) find themselves in after their ship, Suncurl, is wrecked.

Lord Fangatooth, a sorcerer takes over this town after ousting his brother as a tyrant. And takes pride in it. He has a scribe recording all his words who I feel is mocking him but Lord Fangatooth is too proud to notice it and sees it as a praise only. The town has a whole host of other memorable characters not the least the inn-keeper with very interesting and strange additions to her anatomy. Then there is the ex-tax collector who brings out a kind of political commentary on the whole tax regime in our civilised world. The town’s sheriff if you can call it who just wants to follow his Lord’s orders to arrest every newcomer who comes to the town. The man sentenced to death by hanging who just refuses to die.

But all of them are woefully unprepared to deal with our trio (well the duo, Mancy is just along for a ride to get away from his wife). They are taken to the Lord of the town’s keep directly as they arrive on the island. Here Bauchelain indulges in some philosophical debate over tyranny with Lord Fangatooth while Korbal Broach indulges himself with some food and a dead body (not eating it of course). All the while fending off poisoning attempts made by their host. As with other novellas involving these three, there is plenty of bloodletting. Starting with the rag-tag army of the very aptly named (sarcrasm) Tiny and his band.

Well, enough with the summary. This book started out with a better premise than other B & KB books but sadly, i was disappointed with the end result. The climax had no sense of surprise except being too simple. Maybe I’m just used to a much higher level of writing from SE or maybe novellas are not my thing. I like my reading complex and elaborate. This was neither. Chcharacterizationas well done. Premise was set very well. It was the conclusion which left me a bit cold. But all said, if you haven’t yet started with the epic Malazan Book of the Fallen, these short stories involving the necromancer, demon-conjurer and their man-servant can be a very suitable entry point for you. They are full of humor underneath all that dark sounding stuff. There are moments of pure joy where you will laugh out aloud. Like when the inn-keeper introduces the ex-tax collector to her (ahem!) assets who (or which?) can talk. I’ll leave you with that image for now.

Conclusion: It’s a fun read and takes the legend of B & KB forward with Elan but it could have been better.

I received a free copy in exchange for an honest review