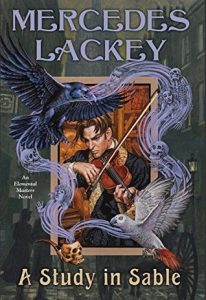 Psychic Nan Killian and Medium Sarah Lyon-White—along with their clever birds, the raven Neville and the parrot Grey—have been agents of Lord Alderscroft, the Elemental Fire Master known as the Wizard of London, since leaving school. Now, Lord Alderscroft assigns them another commission: to work with the famous man living at 221 Baker Street—but not the one in flat B. They are to assist the man living in flat C. Dr. John Watson and his wife Mary, themselves Elemental Masters of Water and Air, take the occult cases John’s more famous friend disdains, and they will need every skill the girls and their birds can muster!

Nan and Sarah’s first task: to confront and eliminate the mysterious and deadly entity that nearly killed them as children: the infamous Haunt of Number 10 Berkeley Square. But the next task divides the girls for the first time since they were children. A German opera star begs Sarah for help, seeking a Medium’s aid against not just a single spirit, but a multitude. As Sarah becomes more deeply entwined with the Prima Donna, Nan continues to assist John and Mary Watson alone, only to discover that Sarah’s case is far more sinister than it seems. It threatens to destroy not only a lifelong friendship, but much, much more.

As one of Mercedes Lackey’s biggest fanboys, It almost shames me to admit that I had never read any of her Elemental Master’s books before receiving a copy of A Study In Sable to review. I was never all that interested in the idea behind the series, so I was a little bit worried that I wouldn’t enjoy the books if I read them, and I didn’t want anything negative to make me second guess buying her other books. I’m pleasantly surprised, however, with how fun and exciting a story I found A Study In Sable to be, like any other Mercedes Lackey book I was unable to stop reading.

One of the things I think most about Lackey is her ability to create richly detailed worlds full of wondrous creatures and magic, as well as characters so realistic I half expect them to step right off the page. In A Study In Sable she continues that trend, only she has done so in an alternate history where well-beloved characters like Sherlock Holmes and Dr. John Watson exist alongside psychics, mediums, and other practitioners of magic. I can’t tell you how many times I laughed seeing Watson and his wife Mary, both Elemental Masters, helping to solve a mystery that Sherlock Holmes can’t properly assist with, as he is a firm non-believer in all things magic.

I enjoyed reading this enough that I’m going to have to go back and read the previous books in the series, as I think it will help me enjoy this book a little bit more than I already do. I feel like there were a lot of inside jokes and character references made throughout the book that I would have picked up on much easier if I had read the previous 11 books first. Not that it really took away from my enjoyment of the book, I just believe it would add to it a bit more. If the previous books in this series are as good as A Study In Sable, I think I have a new series to binge read over the next couple weeks. I now don’t know why I waited nearly 15 years to start this series.

I would recommend this book to just about anyone who enjoys fantasy, but I think fans of Mercedes Lackey, Sherlock Holmes, or Fairy Tales will really enjoy this the most. Whether they have read the previous books or not!