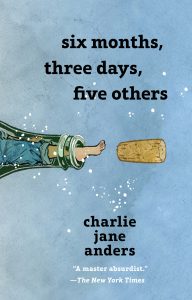 Before the success of her debut SF-and-fantasy novel All the Birds in the Sky, Charlie Jane Anders was a rising star in SF and fantasy short fiction. Collected in a mini-book format, here–for the first time in print–are six of her quirky, wry, engaging best:

In -The Fermi Paradox Is Our Business Model, – aliens reveal the terrible truth about how humans were created–and why we’ll never discover aliens.

-As Good as New- is a brilliant twist on the tale of three wishes, set after the end of the world. -Intestate- is about a family reunion in which some attendees aren’t quite human anymore–but they’re still family.

-The Cartography of Sudden Death- demonstrates that when you try to solve a problem with time travel, you now have two problems.

-Six Months, Three Days- is the story of the love affair between a man who can see the one true foreordained future, and a woman who can see all the possible futures. They’re both right, and the story won the 2012 Hugo Award for Best Novelette.

And -Clover, – exclusively written for this collection, is a coda to All the Birds in the Sky, answering the burning question of what happened to Patricia’s cat.

I’m honestly not really a fan of short stories or short fiction in general and although the name sounded familiar I really had no idea who Charlie Jane Anders was before this book arrived on my doorstep. So I was a little bit hesitant to start reading it and didn’t really set my expectations all that high or expect to really enjoy it. Boy, what a fool I was — I sat down and read all 6 of the amazing short stories in Six Months, Three Days, Five Others in just a few hours and loved every single one of them. I loved just about everything about this book, from the oddly adorable miniature hardback format it comes in, to how well written and absurd the stories could be.

I won’t go into much detail on the stories because I don’t want to spoil anything for anyone, so my review may be a little short, but this is definitely a collection of short stories that I think everyone would enjoy reading. I don’t think I could even pick a favorite because all 6 of them were just that good. Every single one of them was charmingly ridiculous and full of surprisingly detailed characters for how short the stories were. One of my biggest complaints about short fiction is that I feel like just as I’m starting to enjoy a story or character the book is just over with, but in Six Months, Three Days, Five Others I felt like the length of each story was just perfect.

Instead of trying to cram a really long or detailed story into such a small space, Charlie Jane Anders gives us 6 fantastic slice-of life-stories and uses the characters to really movie the stories along and packs them all with a strong emotional punch.

I honestly don’t know how I’ve never heard of Charlie Jane Anders before this, but that is an oversight on my part that I’m going to have to rectify very quickly. Because of Six Months, Three Days, Five Others I’m going to read every piece of short fiction of hers that I can get my hands on. If the rest of what she writes is anything like this I can already tell that she’s going to become one of