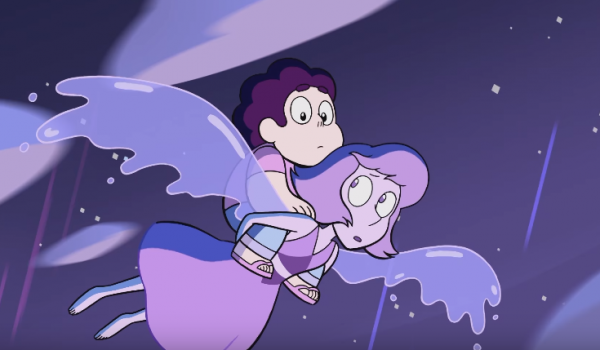 In spite of Steven Universe fairly pro-Earth themes, it never panders to its–our–biases.

It avoids rushing the sentiment and encourages respect for Lapis’s indifference–and yes, even her potential revulsion, with Steven’s sincere straight-faced, “You’ll like it in Jersey, people there seem to hate the Earth.”

It’s more important that Lapis found agency in choice rather than accept Earth. “I can see why you like it,” signals that she values Steven’s point-of-view without necessarily deferring to it. Their conversation is the centerpiece of the episode, quite chill, and still even the aforementioned seemingly banal interplay allow subtle resonance.

After being incapacitated for several episodes and locked in a dreadful unstable fusion, Lapis Lazuli has finally return to the narrative. It’s within the two-minute mark, Lapis Lazuli (Jennifer Paz) awakes and affirms she’ll depart from Earth, and it’s inevitable she’ll fly back.  She has no emotional investment in Earth, and the episode never judges her initial instinct to leave. But we don’t see the inevitable return. Instead, we see Steven (Zack Callison) bade farewell and witness her departure.  Later, he discovers her sitting on the silo with no specification when she decided to return, showing the milestones and turning points of supporting cast often processed through the limited scope of Steven’s eyes.

In a flight scene inspired by Aladdin‘s “A Whole New World,” Steven and Lapis scout various locations, widening the scope beyond the usual Beach City homebase-location.

While Steven Universe‘s prized sceneries and set-pieces are in the vibrant Gem locations forged by otherworldly entities, whether it’s a desecrated Temple or an exotic location like the Sea Spire, this time, it’s the human civilization that glow in their beauty and the animators render them as familiar yet lively. From the night sky, Steven and Lapis behold the brightness of Empire City (where Steven, raised on television tropes, pricelessly suggest she could be a “Single Gem living with a wacky roommate”) and even Jersey. Though Steven and Lapis find Jersey not so attractive, Steven does not rule it out as an optional home for her.

The transferal of location works its wonders in a seamless tonal-transition where Lapis and Steven engage in lighthearted travels to human cities before incidentally flying over the Galaxy Warp, the traumatic scene of her imprisonment in the mirror. She summons water and mirror powers to visually disclose her backstory, and thus a puzzle piece of the yet-to-be-elaborated Wars between the Crystal and Homeworld Gems, to which Lapis was an unfortunate bystander swept up into the violence and the later witch hunt for the Crystal Gems. The disparity between their exploration of human culture and their arrival on the alien creation of the Galaxy Warp leaves a stunning juxtaposition, reminding us of the current functional yet distant co-existence between the alien Gems and the humanity that didn’t use to be so peaceful as the series hints.

As in “The Answer,” the past is artfully told through palettes of colors, where body shape and lights shift and wink out for dramatic and cryptic effect. The choice to silhouette the historical Gem population serve as a tease for details. By withholding details, the claustrophobia of entrapment are amplified in a sequence where Lapis recounts the accusatory eyes of Gems interrogating her before they fled the Earth.

Her chances of homecoming to her old world are severely stunted, as she is now a fugitive. Her home has changed to not to accommodate her but to persecute. If anything, she had been trampled on.

This motif of change evokes the “Everything Stays” lullaby in Adventure Time in the “Stakes” arc, which Rebecca Sugar composed. “Everything stays, but it still changes.” Her home back there has transformed. Things deteriorate but some of its beauty, or the residues of it, stays and evolves. Recalling her testimony that her home had advanced in technology in “The Message,” her home might have “evolved,” but perhaps it ran too ahead for her to keep up. Maybe on Earth, it’s paced at a more adaptable rate for Lapis.

Through the sweet gesture of handing her an autumn leaf, Steven assures her that Earth can evolve for her, and thus her indifference can evolve. It wasn’t that her indifference was condemnable. What matters is that she has breathing space to weigh out whatever pros and cons in her choice.

She’ll have her first con to contend with: one of her captors (or at least, was complicit in her captivity) Peridot now resides in her new home, like a moved-in resident realizing she has moved next to a nuisance of a neighbor. Or Peridot likens more to a wacky sit-com roommate. Cue laugh track.