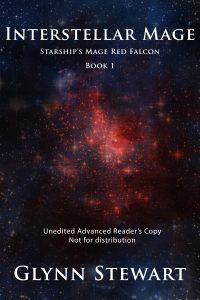 Mars destroyed his ship — but gave him a new one.
Mars drafted his Mage — for the good of humanity!
He should have known that wouldn’t be the end of it…

I can still remember stumbling across Starship’s Mage back in 2013 when searching for new books on Amazon and having it instantly become one of my favorite series so when Glynn Stewart announced he was going to write a spinoff trilogy featuring some other characters from the first book I was a both excited and worried. Happily, I can say that I worried for no reason at all because I thought this book was absolutely fantastic and I couldn’t put it down once I had started reading it.

Over the course of the Starship’s Mage series, one of the questions I kept asking was what happened to Captain David Rice and his crew following the events of the first book. Interstellar Mage takes place about a year after the events of Starship’s Mage and tells that very story as Captain David Rice finally receives the replacement ship he was promised following the destruction of the Blue Jay and follows him and his mostly new crew as they attempt to get back into the business. I think one of the things that really made this book interesting to me is that instead of focusing mostly on a single character like Starship’s Mage did we get viewpoints from a wide variety of characters. It always adds to the suspense and my enjoyment of a series when I can watch a character make poor decisions based on information or assumptions that are wrong.

When an author can get you to scream at the characters in their book you know it’s really good. I was honestly a bit worried that without Damien there to attract danger like he does that the story would become more like a slice-of-life story than an action and adventure one but I think David Rice attracts as much trouble as Damien ever could. While there is definitely some trading there is also action galore as Starships, Mages, and Marines clash over and over again throughout the series. Sometimes it seems like the action never really stopped.

My only real complaint is something really stupid that will probably only bother me but it was the fact that there was a character named after someone in A Song of Ice and Fire. It’s a small thing to be bothered by and I think if was a different name or more subtle I would have just chuckled and moved on but I found it to be a very obvious reference that really jarred me out of the story. It honestly took me a few minutes to get back into the story and I’m glad that it only happened the one time.

Other than that small and petty complaint I thought Interstellar Mage was fantastic and I would gladly recommend it over and over again. I can’t wait till we get to the point where David and Damien reunite, I think it’s going to be an interesting scene to read when it happens!