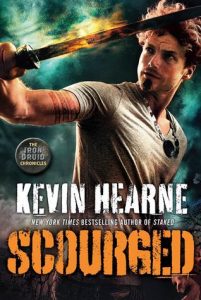 Unchained from fate, the Norse gods Loki and Hel are ready to unleash Ragnarok, a.k.a. the Apocalypse, upon the earth. They’ve made allies on the darker side of many pantheons, and there’s a globe-spanning battle brewing that ancient Druid Atticus O’Sullivan will be hard-pressed to survive, much less win.

Granuaile MacTiernan must join immortals Sun Wukong and Erlang Shen in a fight against the Yama Kings in Taiwan, but she discovers that the stakes are much higher than she thought.

Meanwhile, Archdruid Owen Kennedy must put out both literal and metaphorical fires from Bavaria to Peru to keep the world safe for his apprentices and the future of Druidry.

And Atticus recruits the aid of a tyromancer, an Indian witch, and a trickster god in hopes that they’ll give him just enough leverage to both save Gaia and see another sunrise. There is a hound named Oberon who deserves a snack, after all.

I’ve been a fan of Kevin Hearne’s Iron Druid Chronicles years now and I can still remember stumbling across Hounded at the library years ago and just being floored by how good it was. So knowing Scourged was the lat book in the series made reading it and writing this review a bitter sweet experience for me as the Iron Druid Chronicles has become one of my favorite series over the years. While I bought Scourged the day it released and finished it within 24 hours it’s taken me a couple weeks to really figure out how I felt about this book so that I could sit down and review it. I have to be honest and say that my feelings on it are pretty mixed.

First I think I should say that I loved the majority of this book and think Kevin Hearne is one of the best authors out there right now. I’ve always thought that The Iron Druid Chronicles had some of the most interesting characters in the genre so I was a little bit worried that there were going to be a lot of people we wouldn’t get to see in Scourged before the end. Happily, Hearne somehow managed to give characters like Coyote and Jesus some great cameos and managed to do so without it feeling like he was shoehorning them into the story. One of the things that I think I enjoyed the most about this book is how much action was in it and how fast-paced the story was.

I hought the previous book in the series was a bit slow so I was a little worried about Scourged, but I think this book started with a bang and only seemed to pick up pace as it went on. I know I was flipping through pages so fast to find out what was going to happen next that I was honestly worried I was going to rip a page or two out in my haste.  There are a lot of amazing action scenes in this book that were really fun to read that I think really helped move the story quickly along. I also enjoyed how many different gods we get to see in action in this book, It feels like Atticus and friends rounded up just about every god available to assist them.

My main issue with Scourged was how it took Atticus, Granuaile, and Owen and separated them for the majority of the book. I think their interactions made for some of the best scenes in the entire series so I was pretty disappointed at how little page time they all got together. I get why they were separated but it made the story feel like it was made of three completely separate story lines that just happened to run parallel to each other occasionally, instead of as one cohesive story. I feel like it really detracted from the overall story and made what should have been an epic ending feel a bit rushed and cluttered to me.