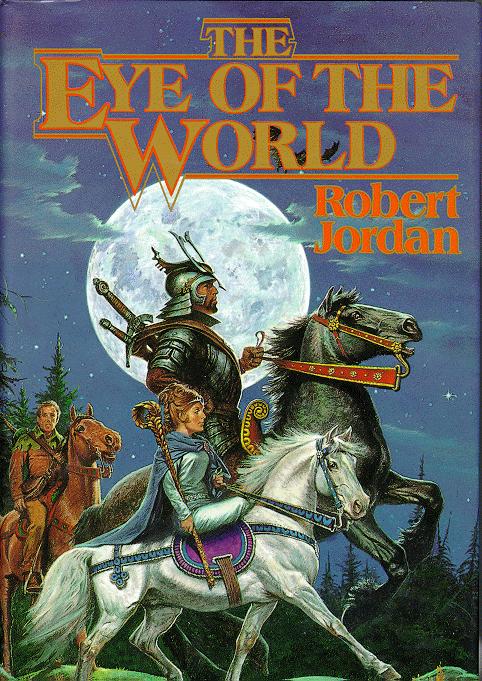 The Wheel of Time turns and Ages come and go, leaving memories that become legend. Legend fades to myth, and even myth is long forgotten when the Age that gave it birth returns again. In the Third Age, an Age of Prophecy, the World and Time themselves hang in the balance. What was, what will be, and what is, may yet fall under the Shadow.

It has proven surprisingly difficult for me to write any sort of review for any book in the Wheel of Time series over the last few years. I seem to make it a few short sentences in before my review becomes the incoherent ramblings of a rabid fanboy. This time around I have given up on even trying to be unbiased in any sort of way. I consider The Eye of the World to be one of the greatest pieces of Epic Fantasy I have ever read. It has become the standard to which I hold every other book I now read, which is a bit funny considering it took me weeks to even make it past the first chapter.

I remember picking up a copy of The Eye of the World from my local library around 10 years ago only to return it the next day after I couldn’t even get through the first chapter. I proceeded to do this at least twice a week for the next few weeks, picking the book up over and over again because the story just sounded so good. All that it took was for me to get through that first chapter and then I was hooked, unable to put it down until the very end. I still consider the day The Eye of the World‘s cover caught my eye as one of the luckiest days of my life, who knows how long it would have taken to discover it otherwise.

I’ve never been able to really decide what kind of story this really is — whether its a coming of age story, an adventure story, or something else entirely. It’s probably a little bit of them all — Robert Jordan did an amazing job taking inspiration from so other cultures, religions and even other authors and turning it into something EPIC. I can seriously read the Eye of the World and then turn around and reread it again just a few days later, that is how much I enjoy the story and the rest of the series is just as good.

I can’t honestly believe that there are people out there who haven’t heard of or read the Wheel of Time but If there is I would strongly suggest they drop whatever they are doing and go out and buy a copy. Buy two copies even, I myself tend to go through about two a year from all of my rereads.