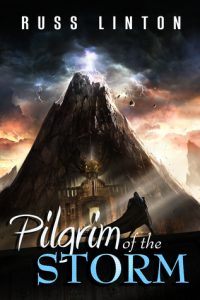 “We are all brothers beneath the Undying Storm…”

Or so Sidge has been taught. Born the sole bugman in an isolated human temple, his many lenses have left little unobserved. But things aren’t as they appear. Only when he embarks on his first pilgrimage does Sidge begin to understand the truth.

His first trip outside the Sheath, Sidge wrestles with otherworldly encounters, a society unwilling to accept him, and growing feelings for a streetwise woman named Kaaliya. All of these seek to distract him from finally learning to channel the power of the Mighty Dragon, Vasheru so that he may one day ascend to the rank of Cloud Born.

But a dire prophecy threatens to change the seat of power in the Stormblade Temple. Gohala, the most likely successor, believes Sidge’s presence to be an abomination and his mentor, Izhar, a heretic. Ultimately, the journey will not only test Sidge’s faith but his sense of identity as he and Izhar

I really though I knew what to expect with this book when I first started reading it a couple days ago. I’ve been a fan of Russ Linton’s since I first read Crimson Son back when it first came out and I figured it couldn’t be too much different. Boy was I wrong in every way possible. Pilgrim of the Storm was a fantastic read from beginning to end, but it was also one of the weirdest books I’ve read in a long time and quite unlike anything else I’ve read in the last few years. I don’t think I was able to put the book down once I h ad actually started reading it. I always had to know what was going on and what was going to happen next.

There was a lot to enjoy about Pilgrim of the Storm so it’s been a bit difficult for me to decide what to talk about on here and what not to. What really made this book stand out to me though was how different I found the story itself and the world that it was set in. I went into Pilgrim of the Storm expecting a story full of all the tropes and trappings of classic epic fantasy and realized pretty quickly that wasn’t going to be the case. There may bits and pieces here and there that you’d expect to see in just about any fantasy story, but for the most part, I thought the store and the world Russ Linton created was something new and different — and I completely loved it.

I also thought it was really easy to find something to connect and empathize with in the main character Sidge, which should be more than a little surprising when you think about the fact that he isn’t even human. Russ Linton did a great job showing just how strange and different he is while humanizing him in his efforts to fit in and be accepted by a society that doesn’t want or trust him. His interactions with all the humans he ran into over the course of his journey made me want to laugh and cry for him in equal parts. I think it’s probably some of the best characterization I’ve read in awhile.

Right now I would probably rate this as one of the top 5 books I’ve read so far this year and would highly recommend it to anyone looking for something new and a little different to read. Russ Linton has once again proven what a great author he is and I can’t wait to get started on the next book in the series.