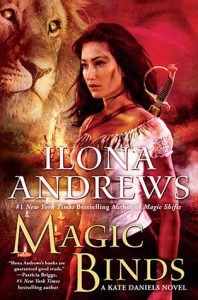 Kate and the former Beast Lord Curran Lennart are finally making their relationship official. But there are some steep obstacles standing in the way of their walk to the altar…

Kate’s father, Roland, has kidnapped the demigod Saiman and is slowly bleeding him dry in his never-ending bid for power. A Witch Oracle has predicted that if Kate marries the man she loves, Atlanta will burn and she will lose him forever. And the only person Kate can ask for help is long dead.

The odds are impossible. The future is grim. But Kate Daniels has never been one to play by the rules…

Magic Binds (Kate Daniels #9) by Ilona Andrews is an exciting, action-packed read from start to finish. I’ve been a fan of the Kate Daniels series from the very beginning so I was excited to receive a copy of Magic Binds to review. I had somehow managed to forget that a new book was releasing at some point this year. I read this book in a single sitting and I think I would rate it up there with Magic Bites as one of the better books in the series so far.

I was a little worried when I started reading that I wouldn’t really enjoy this book, I wasn’t really all that interested in Kate and Curran’s wedding. So I was a bit glad when all hell started to break lose before it even really began. As the 9th book in the series, I didn’t think Ilona Andrews could have many surprises left in store for us, but there were a surprising about of shocking revelations in this book. Kate is definitely hiding something from Curran and their friends and I can’t help but think things are going to end badly for them unless she finally comes clean.

One of the things I enjoyed the most about Magic Binds is the fact that I found it to be so different from the rest of the books in the series, it really broke free of the mold the previous books had created for it. Though I do have one complaint — some of my favorite characters from the previous books didn’t get a lot of time in this book. I think it would have really made the book better if they had featured more in it.

I will end this by mentioning that it would probably be best to read this series in order, each book relies pretty heavily on the book before it. I think anyone who tries to start the series with Magic Binds will find themselves a little too confused to actually enjoy it.