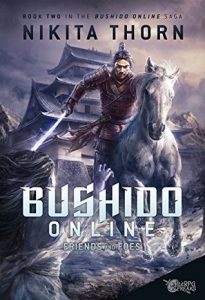 Now a Level 10 ronin, Seiki is slowly coming to terms with the death of Master Tsujihara and his new life in Shinshioka.

Spending his days in the Wilderness, he’s venting his remaining frustration while staying away from the city drama and those griefers, like the Rogami Clan, who had made his in-game experience so challenging thus far. He has even taken up a trade skill.

But when he’s presented with an offer he can’t refuse and accepts a simple mission to deliver a message to Kano Castle, he will quickly find his troubles are only just beginning. Caught in an imbroglio that will only get worse the more he tries to do well, Seiki will set off a series of events that will lead to chaos, death, and the eventual destruction of an entire territory.

Surrounded by betrayal, hidden agendas and people looking to take advantage of him, who can Seiki really trust?
When everything is not what it seems, it can be impossible to differentiate between friends and foes.

I was a little bit hesitant to read this book, I didn’t enjoy the previous book in the series all that much when I listened to it, but I’ve been feeling the urge to give the LitRPG genre another chance lately and figured I may as well give the series another try as well. I’m honestly glad that I did because I enjoyed Bushido Online: Friends and Foes much more than I expected to and ended up listening to it in just a few short days while it was slow at work. A lot of the issues I had with the first book were addressed quite nicely in this one.

My main problem with the first book was the way it focused so much on the social aspect of online gaming, so I was both surprised and pleased with how much of Bushido Online: Friends and Foes focused on the protagonist Seth actually playing the game and advancing his character. I thought the author did a great job of creating a believable video game world as well as some pretty detailed character classes. This is easily the type of video game or MMO I could see myself playing if it actually existed.

The one thing I think the author really nailed in both Bushido Online and Bushido Online: Friends and Foes was the protagonist Seth. I found him to be a well fleshed out character who was easy to love on just about every level. I still really love how he takes his real-world MMA skills with him into the video game and is able to use them to help himself become a much better in-game fighter than he would normally be. Though I do thing the rest of the characters in this book fell a bit flat and the story became bogged down quite a bit around the halfway point.

I also have to be honest here and say I might have enjoyed both of these books a bit more if I had read them instead of listened to them. I feel bad even saying it because I know he’s a popular narrator who’s narrated hundreds of books but I struggle to get through any book Christian Rummel narrates. I think I’m going to have to read the first two books again and then read the third book in the series whenever it releases just to see if I enjoy the series more that way instead.

All in all, I thought this was an enjoyable book with its share of flaws but considering how much I think it improved on the first book I’ll definitely be buying the next one whenever it releases.