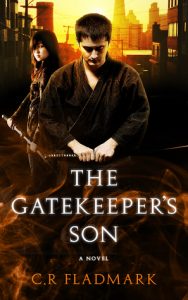 Junya’s grandfather is a billionaire who keeps the secret to his success hidden in a heavily guarded safe.
His mother is a martial artist who wields a razor-sharp katana—and seems to read his mind.
And a mysterious girl in a Japanese school uniform can knock him over—literally—with just a look.
What do they know that he doesn’t?
Junya’s life takes a dangerous turn on his sixteenth birthday, when someone sets out to destroy not only the family’s business empire—the one that he’s set to inherit—but Junya himself. He’s fighting for his life, and doesn’t know who to trust.
What has his family been keeping from him?
Junya’s journey takes him from the narrow streets of San Francisco to Japan, and through hidden portals to the top of the ancient Japanese Izumo Shinto shrine, to places where death and violence are a way of life. And in a mystical world he’s never imagined, he finds his true destiny.

I remember seeing this book when it first released a few years ago and adding it to my TBR list but never actually getting around to reading it. So I was glad to accept a review copy to rectify what was obviously a mistake on my part. The Gatekeeper’s Son by C.R. Fladmark was a great book; with an engaging storyline that drags you in and really leaves you wanting more. This was a book that I received, read, and considered rereading for the second time in the course of a single day.

While I really didn’t know what to expect with The Gatekeeper’s Son, I found it to be an enjoyable and well-written coming of age story that I was unable to put down once I had started. I found the characters to be interesting with well-developed backstories and enough emotional depth that it was really easy for me to connect with them all. One of my favorite things about the book is that I found the story and the way the story was plotted to be really reminiscent of some of my favorite Manga from when I was a kid. It honestly makes me want to go back and revisit them all one more time.

My only real complaint is that there that I found there to be a bit too much legalese for me to really understand what was going on in certain parts of the story with a couple characters and events. I actually had to google a few things which I usually don’t have to do when reading a book. I think it would have been nice if the author had explained things a bit more simply at these points. Though the nice thing is that it didn’t happen all that much so it really didn’t take that much of my enjoyment away.

Despite the few flaws I found and the issue I had with the book, I thought The Gatekeeper’s Son was a fantastic read and I will gladly recommend it to friends and family. I’ve already got my copy of the next book in the series and I can’t wait to start it in the next day or two. I’m looking forward to finding out what happens in the next.